Cart Run is a sub-game in Kirby: Canvas Curse. It is the spiritual successor to Gourmet Race. Like before, Kirby is racing against King Dedede to collect the most amount of food, although it is slightly different. First off, the player moves the blue generator either up or down with the stylus to steer Kirby's cart. The generator is invincible, and it is the only way to protect Kirby. The "food" that is gathered isn't real food, but signs with food on them. Whenever food is collected, Kirby's cart speeds up. The player can also get a speed boost by tapping the screen when it says "Go." If it gets damaged, it will lose its speed. King Dedede moves on a set path and doesn't collect food. The track gets longer at higher difficulties.

How fast the sub-game was played, plus the "food" collected will determine the player's rank.

"Cart Run" comes from the aspect that Kirby is riding a minecart and is participating in a race. 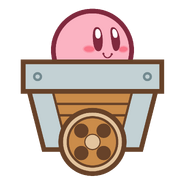