Carrot Castle is a large, regal castle situated in a secluded pine forest in the Mirror World. The level starts off in the forest surrounding the castle, and later takes place inside the vast castle itself. Parasol comes in handy at later most parts of the level due to the heavy winds and spike traps on the castle's roof. Carrot Castle is much like Moonlight Mansion except it has more treasure chests and secrets. Its exterior of Carrot Castle is a vibrant yellow-orange with teal-blue trim and architecture, while its interior is lit by candle light and has slick marble flooring. Its roof has many onion domes and tall spires. Mega Titan resides here and acts as its boss.

There is an air canal right in front of the castle with a switch right up front that connects to Radish Ruins. 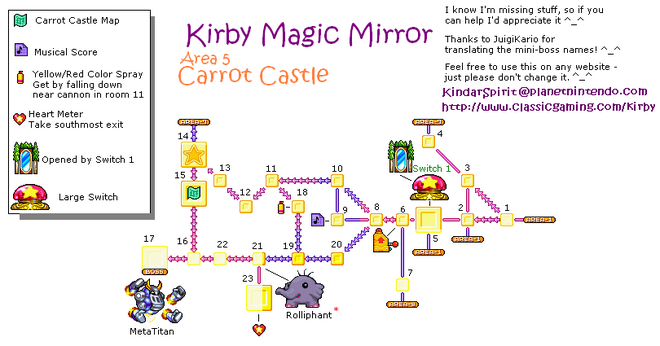 Fighter Kirby before the entrance to the castle.

Atop the roof of Carrot Castle.

Approaching Noddies while on his way to the boss.

Inside on of the earlier rooms of the mansion.

Traveling through the quiet pine forest surrounding the castle.

The setting sun that is seen from the rooftop.
Add a photo to this gallery
Retrieved from "https://kirby.fandom.com/wiki/Carrot_Castle?oldid=122122"
Community content is available under CC-BY-SA unless otherwise noted.