Caramello is a character in Kirby's Dream Land 3. Caramello appears in the third level of Sand Canyon. Caramello wants Kirby to guess how many Gordos make a certain reaction. If Kirby gets it right three times, then he'll be rewarded with a Heart Star at the end of the level.

Caramello later appears in Super NES MG5, along with Pitcher Man, Elieel, Tamasan, and Chef Kawasaki. Here, the field Caramello is in is dark.

Caramello resembles a chick-like creature with what appears to be a yellow eggshell still attached to the lower half of his body. 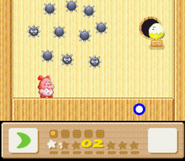 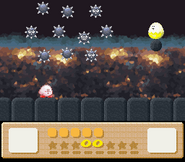 Caramello in Super NES MG5.
Add a photo to this gallery
Retrieved from "https://kirby.fandom.com/wiki/Caramello?oldid=319271"
Community content is available under CC-BY-SA unless otherwise noted.