Captain Stitch has an appearance like that of a large Gordo. His visage appears somewhat angry, as opposed to Gordos, which typically do not have individual expressions, instead almost always having their eyes wide open. In Kirby's Dream Land 2, he appears black with white spikes, while in Kirby's Dream Land 3 he appears more of a grayish-blue color. In the Kirby of the Stars Pilot, he appears gray and his spikes are more elongated.

In Kirby of the Stars Pilot

Captain Stitch appears in the Kirby of the Stars Pilot, along with Master Green, Blocky, Meta Knight, Dark Matter, and Ice Dragon, as one of the monsters summoned by Nightmare. Despite appearing like a Gordo, he does not share their traits of being invulnerable or immune to Kirby's inhale. He is the first victim to Kirby's powerful inhale, and is used as a projectile to defeat Meta Knight. 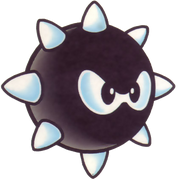 Kirby of the Stars Pilot