Cairn is an enemy that appears in Kirby 64: The Crystal Shards. It gives the Stone ability when inhaled.

Cairn's body consists of three rocks, each one stacked on top of one another. Each of the three rocks Cairn is composed of is a different color: the bottom rock is greenish-brown, the middle is maize, and the top is red. The three rocks are also different sizes; the bottom is the largest while the top is the smallest. The top rock also has a pair of black eyes, making this enemy somewhat resemble a stone snowman.

Cairn makes its only appearance in this game. It simply jumps up and down. When picked up and thrown by Kirby, it scatters its pieces, the biggest piece getting thrown the nearest and the smallest piece the furthest. It gives the Stone ability when it is inhaled.

Cairn's English name comes from the word, "cairn," which is a pile of stones set as a gravestone, monument, altar, or landmark. 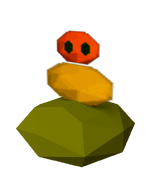 Kirby 64: The Crystal Shards
Add a photo to this gallery
Retrieved from "https://kirby.fandom.com/wiki/Cairn?oldid=346922"
Community content is available under CC-BY-SA unless otherwise noted.