C.O.G.S. is a boss in the Kirby series, debuting in Kirby: Planet Robobot. It was created and manufactured by the Haltmann Works Company.

C.O.G.S. is a mechanical base with a series of five large, blue cogs attached to its metallic side. Each of these five cogs are composed of blue and metallic gears and pieces, and each has a turret. The centermost turret is the largest, the two turrets above and below the innermost turret are the smallest and the two outermost turrets are middle-sized.

C.O.G.S. first appears in Stage 2 of Resolution Road, where it is fought at the end of the stage. In order to defeat it, Kirby, using the Robobot Armor's Jet Mode, must destroy each of the five cogs that make up C.O.G.S.

Each of the three types of turrets that C.O.G.S. is composed of have different capabilities. The largest, innermost turret is able to fire a large, fiery blue shot as well as a large laser beam. The biggest turret is also able to become a flamethrower, capable of unleashing long streams of fire and short bursts of flame. The two turrets directly above and below the largest turret can fire metallic shots and small laser beams. Finally, the uppermost and bottommost turrets fire smaller fiery blue shots as well as laser beams.

The cogs are able to alternately retract in and out, allowing them to use different attacks. The beams fired are also able to bounce off of each other, allowing them to be refracted in different directions. When C.O.G.S. is fully destroyed, the blue cog in the middle will explode, opening a hole that allows passage through to the rest of the level.

C.O.G.S. also appears in Gigabyte Grounds. After it is defeated there, Core Kabula will emerge from the destroyed C.O.G.S.

C.O.G.S. is likely a pseudo acronym chosen to fit the machine's gear-like appearance. However, it may also be a pun on the financial accounting acronym "COGS," meaning "Cost Of Goods Sold," which refers to the costs for a company from selling goods. This would fit the Haltmann Works Company's theme of economically-named characters.

Its Japanese name, ンギュア基地 (Ngyua Kichi), appears to use a corruption of a katakana spelling for gear, ギア (Gia). 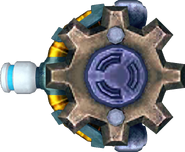