C-R-O-W-N-E-D is the seventh and final level in Dedede's Drum Dash Deluxe. It succeeds Boarding the Halberd. It is part of an amusement park built by Magolor.[1]

King Dedede bounces across drums while collecting Musical Coins. The background is various shades of blue, pink, and purple. Purple mountains, a carousel, a roller coaster track, giant gears, and various other structures decorate it. The sun and spiky clouds appear as cardboard cutouts suspended in the air by strings.

The secret version of this level has more animated background details. Included among them are the sun, spiky clouds, gears, a carousel, roller coaster cars (that resemble snakes), and other amusement park rides. Wavy lines hover in the air, and the very top of the screen shows a murky conglomeration of colors passing through.

Various background elements are themed after Magolor. The gears are blue and gold, reflecting his color scheme. Some structures, many of which appear as parts of roller coaster tracks, are shaped like Magolor's head and also share the blue and gold color scheme.

The tempo is extremely fast. This level introduces prickly pencils--these giant pencils are covered in spikes and suddenly protrude from the top or bottom of the screen to block the way. Dedede must bounce over or under them to avoid taking damage. Breakable drums and propeller drums appear as somewhat-hazardous platforms, and bumpers serve as obstacles. A few enemies also inhabit the stage: Waddle Dees and a Clown Acrobot bounce up and down, a Gordo and Big Gordo hover in the air, a Bronto Burt darts back and forth, and a Beetley flies in and out of the foreground while swiping its horn. Backbeat cymbals, number coins, and Recovery Rings appear to create coins, grant points, and heal Dedede, respectively. The level ends when Dedede reaches the Goal Drum and launches skyward.

By clearing the first six levels, the player unlocks secret levels. C-R-O-W-N-E-D (Reprise) is unlocked by completing every previous level.

The tempo in this level is the same as its normal counterpart. This stage is designed to be the most challenging in the game. Every type of drum appears here: ordinary drums, winged drums, breakable drums, spikeflip drums, and propeller drums. With the exception of bumpers, every obstacle is utilized as well: passing clouds and a blindfold banner (carried by Magolor) obscure things from the player's view while spiked rings and prickly pencils pose a threat to Dedede personally. Backbeat cymbals, number coins, and Recovery Rings appear to create coins, grant points, and heal the king, respectively.

Additionally, every enemy in the game inhabits the level: Gordos, Big Gordos, and Scarfys hover in the air; Waddle Dees, a Bouncy, and a Clown Acrobot bounce up and down; Comos hang from the top of the screen on strands of webbing; Bronto Burts dart back and forth; Swordorys routinely thrust themselves forward in a stabbing motion; a Soarar swoops in and out of the foreground; and a Beetley flies in and out of the foreground while swiping its horn. Many of these enemies barrage the player at the end.

Keychains are hidden in the background of every level in the game. The keychains in C-R-O-W-N-E-D and C-R-O-W-N-E-D (Reprise) are Kirby from Kirby's Adventure and Magolor. The former appears in each level, and the latter represents Magolor, the character after whom the level is themed. 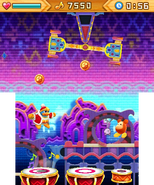 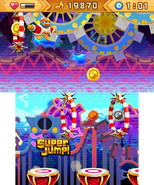 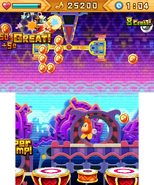 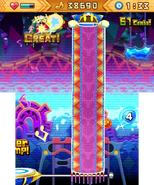