Butter Building is the third level in Kirby's Adventure and its remake. It comes after Ice Cream Island and before Grape Garden.

In Kirby's Epic Yarn, Butter Building makes a cameo appearance as a type of fabric inspired from the view from the top of the building. While the pattern seems to be original, it seems to be based on the original NES version, which had a similar background in certain levels. In addition, a piano rendition of the theme returns for Patch Land's Tempest Towers.

Kirby is seen casually strolling across one of the high-up parts of the tower. Just then, a Poppy Bros. Sr. comes along and knocks him to the edge of the platform. As Kirby struggles to get back up, the Poppy Bros. Sr. throws a bomb on his head and hops away. The bomb detonates seconds later.

This intro is almost the same in Kirby: Nightmare in Dream Land, the only difference being that Kirby frantically looks around puzzled before the bomb goes off, whereas the original had Kirby slowly turn upwards before it's too late.

Butter Building consists of six normal stages. It is a large, tall tower reaching up very high through the sky. It is constructed in the middle of a forest clearing and is a huge cylindrical burgundy and yellow building. Kirby starts off at the base of the tower and must work his way up to the very top. In the remake of Kirby's Adventure, the building is changed from a grand, gilded castle to a ruined, crumbling tower. In Kirby: Nightmare in Dream Land the building has small, unfinished towers at its base, and there are holes covered with wire grating on the decaying walls, signifying that the tower was never fully built or is now falling apart. At the very top of the tower, Mr. Shine & Mr. Bright await Kirby.

Its level hub has every sub-game in the game. It has a Crane Fever room (replaced by a Bomb Rally room in the remake), an Egg Catcher room (replaced with an Air Grind room), and a Quick Draw room. It also has a Museum featuring Starman, and an Arena featuring Grand Wheelie.

Butter Building is the ninth stage in Kirby Fighters Deluxe. The arena is based on the sections where Kirby would walk around the outside of it, as it appears in Kirby's Adventure.

Butter Building has an upper and lower portion. The main hazards are that the building rotates and enemies appear from the sides of the stage. Such enemies include groups of Starmen, Bronto Burts, and Laser Balls. UFO Kirby can appear as well, typically dropping food; rarely, he may drop a Bomber. All of the enemies, including UFO Kirby, can be defeated. 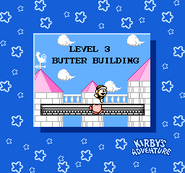 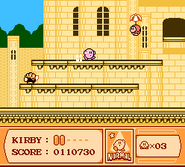 Hi-Jump, proving to be a useful ability for venturing upwards (remake).

Kirby scaling the building from the outside (remake).

Kirby fighting the bosses at the top of Butter Building (remake).

Interior of the building (remake).

Another view of the interior (remake).

View of the landscape around the building (remake).