Regular Enemy
Butch is an enemy in Kirby's Dream Land 2. He is part of a clan of enemies, along with Masher and Blade, and appears in Iceberg 3. It cannot be inhaled.

Butch is a small knight with a black, spherical body. He wears purple armor that covers his Kirby-like hands and feet. In his right hand, he carries a simple handaxe that has an orange, likely wooden, shaft.

Butch walks back and forth slowly. When he sees Kirby, however, he attacks by throwing his axe at him. Butch can throw his axe in two different ways: he can throw it in a straight line so that it boomerangs back to him, or he can throw it in an upwards arc that does not return to him, forcing him to pull out a new axe. If Butch throws the axe in a straight line but fails to catch it, the axe will explode in mid-flight, damaging Kirby if he is within the fairly large radius. Neither Butch nor his axe can be inhaled, so Kirby must either use a Copy Ability or his Air Gun to defeat Butch.

Butch's name comes from the word butcher, which means "to chop savagely." 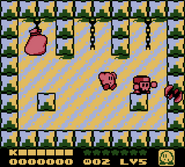