Burning (also called Fireball in the English language version of Kirby's Adventure and Kirby's Dream Course, and Burn in Kirby 64: The Crystal Shards),[1][2] is a Copy Ability in the Kirby series, debuting in Kirby's Adventure.

Burning focuses on flying forward while engulfed in flames to deal damage. As Burning focuses on ramming into enemies, it uses invincibility to prevent from taking damage itself. In addition to being able to light cannon fuses, Burning is also one of the few Copy Abilities that can destroy Metal Blocks. Burning can be obtained from the Flamer enemy and the Fire Lion mid-boss.

Starting in Kirby: Nightmare in Dream Land, Burning wears a bejeweled tiara and he's constantly holding flames in his hands.

In Kirby & The Amazing Mirror, Burning can be obtained from Flamer, Batafire, Moley's oil cans, and from Master Hand's or Crazy Hand's bullets.

In the English-language version of Kirby's Adventure, this ability is called Fireball.

Burning allows Kirby to achieve maximum velocity for a brief period of time, allowing Kirby to cover great distances; as such, Flamer is usually placed in holes where this speed boost would be desirable. Burning can backfire if not used properly, however, potentially causing Kirby to overshoot the intended position or go OB, losing a life (or two health in the case of multiplayer) and the Copy Ability in the process.

In multiplayer, the Transformer has the potential to give the player Burning.

In the English-language version of the game, this ability, like in Kirby's Adventure, is named Fireball.

Burning can be combined with one of the Animal Friends to give it a different move. It is also the only Copy Ability that can destroy the Burning Ability Blocks.

In Kirby's Dream Land 2, Burning can be combined with Rick, Coo, or Kine. Burning can be obtained from Flamer, Efreeti, and Mr. Bright's stars (which had given the Fire Copy Ability prior to this game).

In Kirby's Dream Land 3, Burning can also be combined with Nago, ChuChu, and Pitch. Gooey, who behaves near identically to Kirby, can also obtain Burning. Burning can be obtained from Bobo, Galbo, Magoo, the Burning Bukiset, and Boboo; Mr. Bright, who appears as one of Ado's paintings in this game, doesn't give any Copy Ability.

Burning lets Kirby fly straight up as a fireball. This destroys any white blocks, gray blocks, and Ability Blocks in its way for double points. After reaching the top of the Stage, Kirby will bounce 45° to the left. Burning can be obtained from Flamer or a Changer. Functionally, it is the opposite of Stone.

Burning, here called Burn, can be combined with other Copy Abilities to create Power Combos, which can be used to create various fiery options. Burn is capable of destroying red color-coded blocks. Burn can be obtained from Bobo, Galbo, Burnis, Magoo, and Miracle Matter's Burn form.

Burning retains its normal behavior of charging forward as an invincible fireball. This attack can destroy rainbow lines if they are too vertical, but will follow them if making contact at a shallow angle. It is also the only Copy Ability that can destroy the Burning Ability Blocks. Burning can be obtained from Bobo or Flamer.

As Kirby: Canvas Curse only allows Copy Abilities to be used within the stages they are found, Burning can only be used in certain locations. Burning can be found in the following areas: 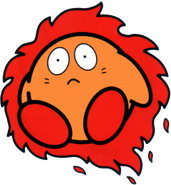 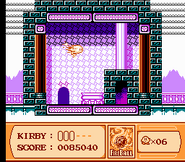