Burner Bird is a large enemy in the Kirby series, debuting in Kirby: Planet Robobot.

Burner Bird is a large, metal contraption based off of a drinking bird. Its head and neck are made of copper. It has a a round red mouth, a black eye on each side of its head, and a red comb on top. The vial at its bottom is round and contains grayish-green liquid. Burner Bird's main unit is connected to two metal columns.

Burner Bird appears exclusively in Stages 2 and 7 of Gigabyte Grounds and Stage 7 of Access Ark. It is always situated between the foreground and background- this makes it impossible for Kirby to attack it.

Burner Bird attacks by spewing flames from its mouth. When its eyes turn red, the enemy tilts back; begins blasting fire into the air; then bends down, torching the entire area directly in front of it. Burner Bird's eyes turn black once more, and the enemy reverts back to its original, neutral position for one second.

Burner Bird continues its attack cycle even when Kirby is out of range. 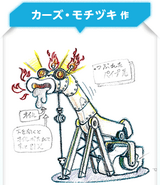 Burner Bird torches the ground in front of it.
Add a photo to this gallery

Kirby: Planet Robobot
Add a photo to this gallery
Retrieved from "https://kirby.fandom.com/wiki/Burner_Bird?oldid=312905"
Community content is available under CC-BY-SA unless otherwise noted.