Bugzzy is a Mini-boss and sometimes Helper in the Kirby series.

Bugzzy, as his name implies, is a giant insect. He is based off a stag beetle and uses his large mandibles to pick up and slam whatever it can grab.

Bugzzy appears in the later levels as a mini-boss, and is the only enemy that gives the Backdrop ability. He can also be found in the Arena in Grape Garden.

Bugzzy dashes toward Kirby in a straight line trying to grab him with his mandibles. Once grabbed, Bugzzy slams Kirby into the ground. He also flies into the air and hovers after Kirby slowly, enabling it to reach him whether he is positioned high or low. Bugzzy supplies ammunition to use against himself in the form of two tiny beetles it releases into the air. These bugs slowly flutter and home in on Kirby. They can be inhaled and spit back at Bugzzy. Also, stars spit at the beetles will penetrate through them the way Double stars usually work. The delay that happens while he is charging to grab is shortened from his appearance in Super Star, and can catch inattentive players off guard.

Bugzzy is faced as the tenth challenger in the Avalanche tournament and is apart of the Hard tier of enemies.

Bugzzy returns as a mini-boss. His actions remain the same as his initial appearance, though his size is no more twice the size of Kirby now. The stars he kicks up from his attacks give Suplex as well as himself.

Bugzzy appeared in the anime as a Demon Beast purchased from Nightmare Enterprises by King Dedede in the episode Kirby's Duel Role, after he discovered that Kirby was no good at swordplay after observing his "duel" with Meta Knight. This version of Bugzzy didn't attack with his pincers or the throwing techniques his game counterpart used. Instead, this Bugzzy used a large curved sword in battle, along with a giant club. Kirby dueled Bugzzy, and, with Meta Knight's help, inhaled Bugzzy's sword to get the Sword ability. Angered, Bugzzy focused his power and created two new swords out of energy in his hands. Sword Kirby began to fight Bugzzy until Meta Knight reminded Kirby to focus his power, at which point Kirby falls asleep. When given the order to finish Kirby off, Kirby wakes up and uses the Sword Beam attack. Bugzzy tries to block it, but it was futile as the attack shattered his swords and he was split into two halves that exploded.

His appearance is similar to his Helper design, only he is more or less completely blue.

Bugzzy was one of the few enemies from the games to come into the anime to not give an ability it is associated with (Sword). This is probably because the abilities that look similar to Backdrop and Suplex were used later (Fighter and Throw respectively). 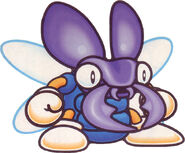 Kirby Super Star
Add a photo to this gallery
Retrieved from "https://kirby.fandom.com/wiki/Bugzzy?oldid=134071"
Community content is available under CC-BY-SA unless otherwise noted.