Kirby Wiki
Register
Don't have an account?
Sign In
Advertisement
in: Enemies, Characters, Articles with non-canonical information,
and 28 more
English

Bugzzy appears to be based on a stag beetle, having enormous mandibles with which he can grab and slam Kirby. He has four thin, yellow limbs, and wears white gloves on his hands and white shoes on his feet. Bugzzy is also capable of flight, behavior common among beetles, but much unlike them, his wings are almost always exposed, even when he rests. His carapace is typically purple or indigo (with a faint teal iridescence in Kirby Star Allies), and the rest of his body is a darker blue, with his exposed underbelly also being blue.

Bugzzy's main tactic is to dash toward Kirby in a straight line in an attempt to grab him with his mandibles. Once Kirby is in his grasp, Bugzzy will either leap forward and drive him into the ground, slam him backwards or pound him repeatedly. Bugzzy may also fly into the air and hover in pursuit of Kirby, and will ensnare him if he gets close enough. Bugzzy supplies ammunition to use against himself in the form of two Bugzzy Jrs. that he releases into the air. These ladybugs slowly flutter and home in on Kirby. Luckily, they are frail; Stars spat at them will penetrate through them the same way Double Stars usually pass through regular enemies. The charge-up time for his grab attack is much shorter than in the later game, Kirby Super Star, and can catch inattentive players off guard.

Bugzzy is faced as the tenth challenger in the Avalanche tournament and is a part of the Harder tier of enemies. He is fought after Lololo and Lalala and before Paint Roller. His dialogue with Kirby is below.

Bugzzy returns in these games as a mid-boss. His actions remain the same as in his initial appearance, though his size is no more twice the size of Kirby now. He is weak to the Sizzle and Blizzard elements. Bugzzy now gives Suplex instead of Backdrop. Bugzzy also is the Helper for the Suplex ability. As an ally, his color scheme is changed to a purple exoskeleton and a blue body, which has since become his main coloration in the series. As a Helper, he has access to the same attacks Suplex Kirby uses. He can perform the Torrent Lariat underwater, albeit without needing to grab an enemy. Along with Bonkers, Bugzzy is the largest Helper and stands twice as tall as the other ones. In Kirby Super Star Ultra, Bugzzy appears in Helper to Hero, with an orange shell and a purple belly.

Bugzzy appears in Kirby: Triple Deluxe in the form of a keychain.

Bugzzy returns in Kirby Star Allies as a mid-boss. He still provides the Suplex ability when inhaled, and reprises his role as the ability's friend. As a mid-boss, he has access to new attacks, such as the Back Breaker, and a mid-air Dash Grab. A stronger version of Bugzzy also appears in later stages, with a black exoskeleton, a red belly, red eyes and purple limbs. This version's Dash Grab lasts longer, and he can change directions while dashing. He also has access to the Pinpoint Kick. In addition, he can also dash diagonally while in the air, and will send out four Bugzzy Jrs. instead of two.

During Soul Melter EX, Twin Buggzy is fought instead.

Bugzzy appears in the anime as a monster purchased from Nightmare Enterprises by King Dedede in the third episode Kirby's Duel Role, after he discovers that Kirby is no good at swordplay while observing his "duel" with Meta Knight. In the anime, Bugzzy doesn't attack with his pincers or the throwing techniques as he does in the games. Instead, he brandishes a large curved sword in battle, along with a giant club. Kirby initially tries to inhale Bugzzy entirely, but to no avail (a reference to the fact that in the games Kirby cannot inhale mid-bosses until they are defeated). But with Meta Knight's help and Tiff's instruction, Kirby inhales Bugzzy's sword and gets the Sword ability. Angered, Bugzzy focuses his power and creates two even larger swords which he then brandishes against Kirby. Sword Kirby begins to futilely fight Bugzzy until Meta Knight reminds him to focus his power, at which point Kirby falls asleep. Just before Bugzzy can land a decisive blow, Kirby wakes up and uses the Sword Beam attack. Bugzzy tries to block it, but the beam shatters his swords and cleaves him in half.

Bugzzy was one of the few game enemies to come into the anime and not give an ability it is associated with (in this case, Sword). It is worth noting, though, that the abilities that Bugzzy usually give, Backdrop and Suplex, do not appear in the anime. Most probably because the designs for those abilities were already taken (Fighter and Throw, respectively)

Bugzzy is a large stag beetle-like monster with tan shoes and gloves, orange limbs. His body is colored light blue and his head and wings behind his back are dark blue. He has a set of large eyes and a pair of mandibles.

Bugzzy can fly at high speeds thanks to the wings behind his back and is armed with a massive club and sword for battle, he can also summon two larger hand held swords for battle.

Bugzzy appears as an Advanced-class support spirit in Super Smash Bros. Ultimate. When applied to a fighter, the fighter’s throws become stronger. 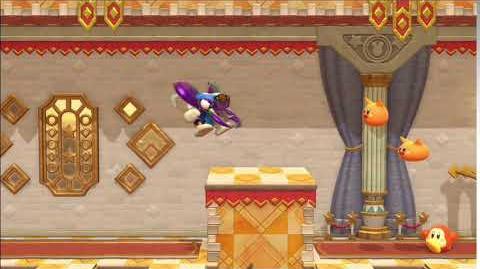 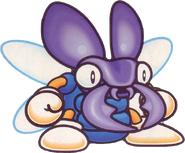 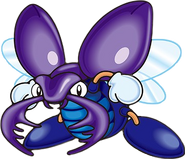 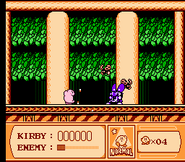 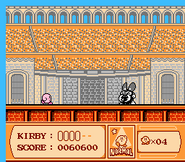 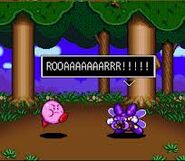 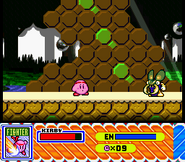 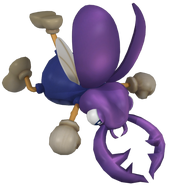 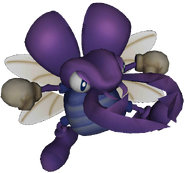