Bubbly Clouds is the fourth stage of Kirby's Dream Land and the third stage of the Spring Breeze sub-game in Kirby Super Star/Ultra. It is visited after Float Islands and before Mt. Dedede. Bubbly Clouds is replaced by Crash Clouds in Revenge of the King.

In Kirby's Epic Yarn, Bubbly Clouds makes a cameo appearance as a type of fabric. The pattern appears to be based closely on the Kirby Super Star Ultra version. In addition, a piano rendition of the theme returns for Dream Land's Cloud Palace.

So far, all versions of Bubbly Clouds have had Kracko feature either as a boss and/or mid-boss along with Kracko Jr.

In Kirby's Dream Land, Kirby falls into a large cloud which then flashes and drops stars and dozens of both large and small Kirbys from it.

Bubbly Clouds is a regal area high above the skies of Dream Land. Many puffy, multicolored clouds and beautiful architecture make up the scenery of the level. Kirby even has a full view of Dream Land's galaxy at later points in the level. The level also has many spike traps in it, making Parasol quite useful. Near the end of the level, Kirby may enter the moon to heal (and fight a mid-boss in Spring Breeze) right before the boss battle. In the last level of Kirby's Adventure and its remake (a mini rendition of Kirby's Dream Land) Kirby can enter the moon once more. This time however, a secret switch is found for Kirby to activate. Kracko is the boss of Bubbly Clouds, and Kracko Jr. (his weaker form) is fought as a mid-boss.

In terms of enemies, Bubbly Clouds has many airborne enemies like Bronto Burts and enemies wielding Parasols. In Kirby's Dream Land, Two Faces and Dizzys also appear, and in Spring Breeze many bird-like foes including Tookeys and Twizzys appear.

In Kirby Super Star and its remake, if Kirby flies up to the moon and presses Up, he will enter the moon like he would a door. It leads to a room full of food and Bonkers.

Bubbly Clouds features two platforms, with each one attached to an arch in the mid-ground. The main hazard of the stage is Kracko himself, who will enter the battle and do one of his attacks: get close to some of the Kirby's and use his revolution beam attack, hover above someone and pour down rain, or move from one side of the arena to the other while dropping lightning that can only be avoided by dodging or standing under the platforms. Kracko cannot be defeated, unlike Lololo & Lalala during their appearance in the Castle Lololo stage.

One area in the World of Light mode is patterned after Bubbly Clouds. Food is plentiful here.

Bubbly Clouds' name is derived from "bubbly," which can either refer to an informal term for Champagne or sparkling wine, or simply something full of or producing bubbles, such as soda. 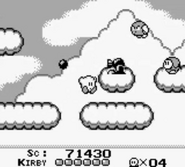 Bubbly Clouds in the original game. 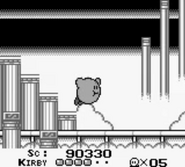 The intro in Kirby Super Star.

Kirby fighting Kracko at the end of Bubbly Clouds.

The sky, as seen from Bubbly Clouds.

The night sky in Bubbly Clouds. 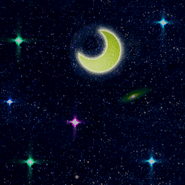 Another view of the night sky.

The whole galaxy, seen from the top of Bubbly Clouds.

Kracko gazes at the player.