Kirby Wiki
Register
Don't have an account?
Sign In
Advertisement
in: Enemies, Characters, Enemies in Kirby's Adventure,
and 2 more
English

Regular Enemy
Bubbles is a rare enemy in the Kirby series, only appearing in Kirby's Adventure and its remake. It yields the Ball ability when inhaled.

Bubbles is very simple in appearance: it is a blue spherical creature with two large shiny eyes and a small mouth that always displays a smiling expression. In Kirby: Nightmare in Dream Land, Bubbles was slightly redesigned to have rosy cheeks and its body has been made a lighter blue.

Bubbles makes its only appearance in Kirby's Adventure and its remake. These enemies bounce all over the place, unrestricted by gravity. They normally switch directions whenever they hit a vertical surface. However, at times they appear to be trying to hit Kirby, and in these cases they can be hard to get rid of.

In the sub-game Bomb Rally, Bubbles replaces a hit Kirby and has the bomb bounce off of it.

Bubbles is named for its round shape. 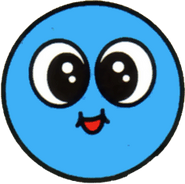 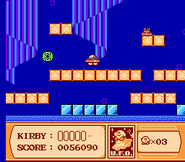