Bubble Head is an enemy in Kirby: Squeak Squad. It is a relative of Hot Head and is the only Regular enemy to grant the Bubble ability when inhaled.

Bubble Head greatly resembles its Fire counterpart, with the only differences being that it has a mane of bubbles rather than fire, and its skin is teal with light blue feet instead of orange with yellow feet.

Bubble Head attacks by breathing bubbles out of its trunk-like snout, much like how Hot Head blows out fire. Bubble Head can preform a total of two different attacks, the likes of which are chosen depending on its distance from Kirby.

Bubble Head is the only common enemy in the game that bestows Bubble. The only other source of the ability is Buboo, a crab-like miniboss that shields itself with a coat of bubbles. 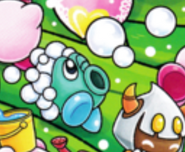