Bronto Burt are very common enemies in the Kirby series appearing in almost every Kirby game. Bronto Burt dosen't give Kirby a copy ability when inhaled.

They usually come in groups of 3 to 5, and attack in flocks, usually in a formation such as a zigzag, "V", or a vertical line. Some Bronto Burts will chase after Kirby trying to run into him, and some just take off and fly away very fast when Kirby gets near, out of fear. Just like Waddle Dee is the most common enemy on the ground, Bronto Burt is the most common enemy in the air. Also like Waddle Dee, most of Bronto Burt's behavior remains the same throughout the series. One could guess that they are the "Waddle Dee" of the sky.

Bronto Burt are said to be pink spherical insects with fly-like wings and orange shoes. They have mouths similar to Kirby's own and their eyes always appear to be scowling. Like other Kirby enemies they sometimes are found in other colors too.

Bronto Burt appears in nearly all Kirby games with similar attack patterns in each one.

Bronto Burt's first appearance, they fly in various formations that can be difficult to avoid; especially in later levels where they tend to dart in from off-screen faster than Kirby can react. In Extra Game they are replaced by the tougher Koozer.

Bronto Burts are almost the same as in Kirby's Dream Land, but there are now ones that fly after Kirby, chasing him in some areas. They can either be intercepted and defeated before they get to Kirby, or avoided until they give up and fly away.

In a few areas, Bronto Burt will suddenly drop out of the sky randomly and may land on Kirby if he is unlucky.

Bronto Burt is an ally of Kirby during the day who helps him get back on the course if he goes O.B. During the night, Bronto Burt is replaced by Flapper.

Bronto Burt is the second opponent in the learning stage.

This is the dialogue with him:

Bronto Burt acts much like how it normally does. In The remake of Spring Breeze, Bronto Burt is replaced by the faster and stronger Koozers.

When Kirby lifts Bronto Burt above his head after having inhaled him, he will fly upwards for a few seconds, and then fly back down until Kirby lands. Two Bronto Burts also appear in a mini-boss battle against a giant Sawyer in Stage 1 of Ripple Star. Also, it is the only appearance without a mouth.

Ghost Kirby can possess any Bronto Burt he finds, allowing Bronto Burt to surprisingly be a playable character in this game. While possessed by Kirby, Bronto Burt can fly anywhere, but its only attack is to ram into other enemies; this is somewhat helpful though, for it flies very fast and can kill 2 or 3 enemies before dying itself.

Bronto Burts are scheduled to appear in Kirby's Epic Yarn, behaving the same way as past appearances. Some Bronto Burts fly in the air while holding a Bomber, and will drop it when Kirby gets near it.

In Super Smash Bros. Brawl it appears as both a trophy and a sticker. The sticker uses his design from Kirby 64. 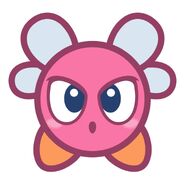 Kirby Super Star Ultra
Add a photo to this gallery
Retrieved from "https://kirby.fandom.com/wiki/Bronto_Burt?oldid=71013"
Community content is available under CC-BY-SA unless otherwise noted.