Boxy is a mid-boss who has appeared in two Kirby titles to date. Boxy grants Magic when she is Inhaled.

Boxy is pink and resembles a large box or present with a big red bow on the top of her head and has a long stem that acts as a tail and has two green leaves at the end of it. Her mouth is large and jagged making her somewhat resemble a bear trap. Boxy has eyes similar to Kirby's eyes that are maroon and also has rosy cheeks.

Boxy debuts in Kirby & The Amazing Mirror as a mid-boss. Boxy may try to quickly dash across the arena to ram Kirby, or jump in place several times. Occasionally, Boxy will spit out a small pink box with a red bow on top. When Kirby approaches one of these boxes, it will open to reveal one of the following:

Boxy reappears in this game as a mid-boss. She acts exactly as she does in Kirby & The Amazing Mirror. However, Boxy is now slightly slower than in her previous appearance. The list of items contained in the boxes that she spits out have changed as well. Boxy's boxes can now contain:

Like most of the other returning characters in Kirby: Squeak Squad, Boxy uses new, updated sound effects. 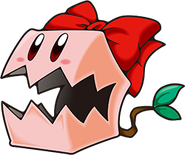