Bouncy is a pink creature with her top half of her head bearing a strong resemblance to Kirby that sits atop a large metallic spring at her bottom, wearing a bow on her head.

Bouncy debuted in Kirby's Dream Land 2, first appearing in the third stage of Grass Land. She continually bounces, either leaping forward or hopping in place. If she leaps forward, she will perform two short jumps followed by a high jump, and will change direction when she hits an obstacle; alternatively, if she is hopping in place, she will perform two small hops before doing something else. If she comes into contact with Kirby, Kirby will take damage.

Bouncy appears as an enemy in Stages 9, 10, and 11. She remains in one place, constantly bouncing. She drops a Changer item when defeated. Bouncy also appears in the "border line cleared" animation, bouncing directly behind Broom Hatter.

In Kirby 64: The Crystal Shards, a giant Bouncy called Big Bouncy appears as a mid-boss near the end of Stage 2 of Planet Popstar. Other than that, she behaves as she did in Kirby's Dream Land 2.

In addition to her role as an enemy in standard stages, Drawcia summons purple Bouncys to attack Kirby.

Bouncy acts as a stage element in the Kirby Brawlball sub-game.

Regular enemy
In Kirby's Return to Dream Land, a similar large-scale version of Bouncy called Bouncy Sis appears alongside her smaller counterpart. In addition to serving as a regular enemy in Main Mode, Bouncy appears in the Water Challenge of Kirby's Return to Dream Land. Similarly, she also appears in the New Challenge Stages in Kirby's Dream Collection Special Edition.

Additionally, a variant of Bouncy known as Halcandran Bouncy カ appears in Halcandra. It acts the same way as Bouncy.

While Bouncy does not appear in the Story Mode, she acts as an enemy in the Dedede's Drum Dash sub-game, as well as in the downloadable Dedede's Drum Dash Deluxe. She simply bounces up and down on a single drum. King Dedede must super jump over her to avoid damage.

Bouncy appears in this game as an enemy and as a figurine.

Bouncy appears in the Kirby 3D Rumble sub-game. She behaves like she does in Kirby's Return to Dream Land, though she only bounces in place.

Bouncy first appears in Stage 2 of Level 3. She behaves like she does in Kirby 3D Rumble, though she can now bounce forward and back. Like most enemies in the game, scaled-up versions of her appear that can be Inhaled for a Blaster Bullet.

Bouncy serves as an enemy in Kirby Star Allies. Big Bouncy also makes a reappearance, acting similarly to a mid-boss, but not properly so (as it lacks a health bar; it just has a lot of stamina). 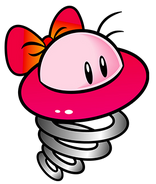 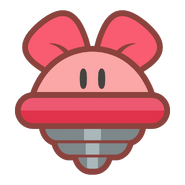 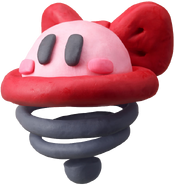 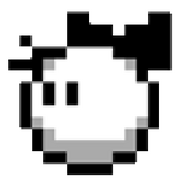 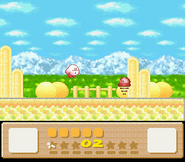 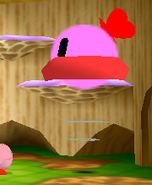 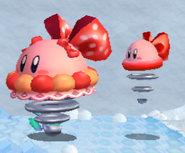 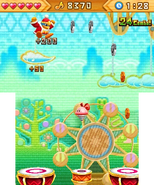 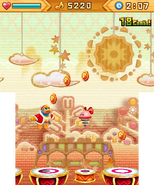