Kirby Wiki
Register
Don't have an account?
Sign In
Advertisement
in: Articles nominated for merging, Articles with non-canonical information, Sub-games,
and 10 more
English

Boss Endurance, also commonly referred to as Boss Rush, appears in many Kirby games. It is a sub-game where Kirby must battle all the bosses from the game, usually with little to no recovery items. In some games this mode must first be unlocked (usually by completing story mode) before the player is able to attempt it.

In general, the bosses are fought in the same order they were in story mode. However in some cases they might be fought in a random order.

In the more current games, the Boss Endurance sub-games usually have a specific title screen for it that displays each of the game's bosses.

Although Kirby's Dream Land didn't have an official "Boss Endurance"-type of sub-game, the first section of the final level, Mt. Dedede, features mini-stages that include the first four bosses fought in a similar style to the Boss Rush segments from Mega Man games. They can be defeated in any order before battling King Dedede, who is fought last. This concept is likely to have been what inspired Boss Endurance.

Before Kirby can fight any bosses, he can choose an ability from a room abundant in Copy Essences. Generally, Kirby is allowed to take a Helper or teammate with him. There is also a Warp Star in the room. When Kirby hops on it, he will go begin the battle royale. Between bosses, Kirby can heal with a limited number of Maxim Tomatoes and take a different ability from two randomly-generated Copy Essences.

In Kirby's Adventure, this mode is called V.S. Boss! Kirby must go through a series of bosses in the order he fought in the Story Mode. Upon defeating each boss, Kirby must collect each of the Star Rod pieces to move on to the next battle, just like in story mode (this step is omitted in the GBA remake). Kirby also does not have any access to recovery items. The bosses, in order, include:

This mode is unlocked by beating the game once. In 3D Classics: Kirby's Adventure, Kirby's Vitality regenerates after the Heavy Mole fight.

The Boss Endurance challenge of Kirby's Dream Land 2 is more or less unchanged from its use in Kirby's Adventure; it is unlocked after 100% completion of the main game, and pits Kirby against the bosses in the order he fought them in the game, with no breaks or chance for recovery between battles.

A form of Boss Endurance is activated after entering a code on the title screen. The player is able to select which Pinball Land to go to, but will instead jump straight to that Pinball Land's boss. Just like the main game, it is only possible to lose a life on the final boss. Also like the main game, the first three bosses can be fought in any order before fighting the final boss:

This mode is known as "Boss Butch". Again, Kirby gets to fight all of the bosses of the game in a consecutive order:

Note that in this Boss Endurance, Kirby cannot call Gooey.

The backgrounds of each boss fight are notably different, introducing a new aesthetic component for the player to explore:

The boss themselves fight in exactly the same way, regardless of the graphic changes.

If the player is defeated during any of the bosses, the game over screen will consist of a new artwork of the respective boss battle in which they lost. 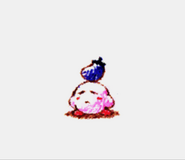 Screen shown if defeated by Acro

Screen shown if defeated by Pon and Con

Screen shown if defeated by Adeleine

Screen shown if defeated by Dark Matter or Zero

Kirby must fight through all of the bosses in the game in order:

Kirby cannot copy any abilities from any enemies or projectiles. The only ability he is able to use is Ribbon + Crystal against 0².

The option "Try Again" is replaced with "Accept Defeat" rather than the "Tough it Out" in story mode.

This version of Boss Endurance is similar to The Arena in Kirby Super Star, except that doorways are used as transitions to the next enemy instead of Warp Stars. Kirby has the choice of all Copy Abilities at first (except Master, UFO, Magic, Mini, Cook and Crash). Between fights, two random abilities are available, as well as 4 single-use Maxim Tomatoes. The majority of the fights are random:

After the above bosses have all been defeated, the following four bosses are fought afterwards in order:

The player can attempt this sub-game once all Boss Battle Badges are obtained. Kirby starts the sub-game inside the base of tower filled with ability bubbles (including Triple Star). Once again, Kirby fights bosses in a linear fashion in the same order he did in the story. Before Kirby fights King Dedede, he will get a single Maxim Tomato bubble. On the road to Dark Nebula's room, he will obtain cherries, meat, and another Maxim Tomato by playing through the whole last level instead of just the boss.

The order Kirby fights the bosses goes as follows: