View source
watch 02:23
Wiki Targeted (Games)
Do you like this video?
Play Sound

Booler (Bumpin' Boo in Kirby's Pinball Land) is an enemy in the Kirby series, debuting in Kirby's Dream Land.

Booler is a nearly transparent specter. It has a wicked smile on his face. Booler has a long, wispy tail and often bears its large red tongue in a childish manner. Booler is also shown to be trailed by a paranormal flame in some official artwork, which is a common trait of many stereotypical spirits.

Booler's color varies from game to game. Though Kirby's Dream Land and Kirby's Block Ball are monochrome games, the ghost's artworks portray it as light blue and purple, respectively. Its in-game sprites in Kirby Tilt 'n' Tumble are white.

In Kirby Tilt 'n' Tumble, they do not stick their tongues out, but instead have a tendency to get angry if Kirby bothers them.

Booler appears in Castle Lololo. It floats eerily to chase after Kirby or just drifts around in a set pattern. When Booler floats, it wags its tail around. Gaspar acts as its Extra Game equivalent.

Booler appears as an enemy in Stages 2, 10, and 11. It floats in place and drops a Flip item when defeated.

To date, Kirby's Dream Land is the only platformer that Booler appears in. The rest of its appearances are all in early spin-off titles. 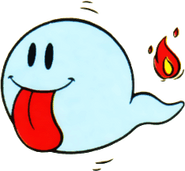