Bomber is an enemy in the Kirby series. He is a weak, accident-prone missile-type enemy with legs and a skull painted on either side. His metallic-looking exterior is actually really delicate, so one wrong move and he shatters, leaving his highly flammable insides to erupt out of the cracks in his damaged body, creating an explosion and instantaneously taking out Bomber in the process. This explosion KOs all enemies on-screen, though it will only hurt Kirby if he gets too close. Bomber is often perched dangerously close to the edge of a platform and then falls off promptly after Kirby comes on-screen.

While this is the most common way for the explosion to occur, he may also explode if Kirby gets in his way.

Bomber first appeared in Kirby's Adventure and in its remake. In these games it perches on the edge of a platform and then falls off promptly when Kirby comes on-screen. When inhaled, it gives Kirby the Crash copy ability.

Bomber appears as an enemy in Stage 8. He remains in one place and drops a Crash item when defeated.

Bomber reappears in Kirby Super Star and its remake, having the same behavior as in Kirby's Adventure. It is weak to the Sizzle element.

Bomber also appears in Kirby & The Amazing Mirror, serving the same role as in previous games.

In Kirby: Canvas Curse, outside of the main game, Bombers appear in the Paint Panic sub-game where they chase Kirby as he moves through the stages, acting as a timer. If the Bombers collide with Kirby, they will explode, cause damage, and subtract points.

Bombers make their first appearance in the stage Lava Landing in Kirby's Epic Yarn. Because of the yarn whip, Bomber's actions are changed in Kirby's Epic Yarn and its remake, Kirby's Extra Epic Yarn. Bombers are often regenerated and usually follow a set path. If it falls to the ground or is unraveled, the Bomber will land on the ground upside-down and explode afterward. If Kirby touches it (even on the sides) it will flatten and explode. Bombers deal massive damage with their blasts and can destroy a lot of Beads.

If rolled up, Bomber will turn into a small bomb with a lit fuse. When the fuse runs down, the bomb explodes.

Defeating two different sets of Bombers in Castle Dedede will reveal pull tabs which are used to collect Bonus Stars and the Castle Dedede music.

Bomber appears in the multiplayer mode of the Kirby Fighters sub-game in Kirby: Triple Deluxe as well as in its successors, Kirby Fighters Deluxe and Kirby Fighters 2, as an item. It can be picked up and thrown, after which it will behave as it does as an enemy.

In Super Smash Bros. Ultimate, Bomber appears as an explosive item. Upon spawning, Bomber will stand in place for a few seconds before walking around the stage. Fighters can pick it up and activate Bomber by pressing the A button. This will cause the user to stand in a pose for 1.5 seconds before Bomber denotates into a massive explosion, dealing damage and knockback to anyone caught in the explosion except the user. However, if the user does not activate Bomber within a short time, Bomber will explode on his own damaging everyone in the blast radius including the user. Attacking Bomber as he is walking across the stage will also trigger him to explode. Kirby can inhale Bomber, but doing so will explode and slightly damage him, instead of giving him the Crash ability.

Bomber also appears as an Advanced-class Support spirit. When applied to a fighter, the fighter will have a Bomber equipped. 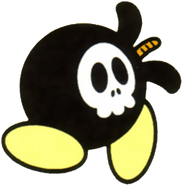 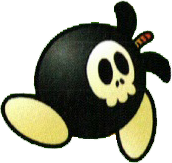 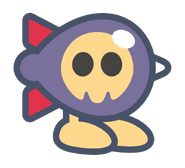 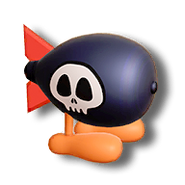 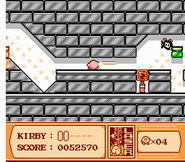 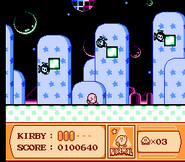 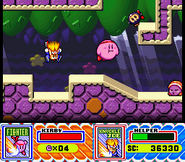 A Bomber in Kirby Star Allies explodes behind Kirby. 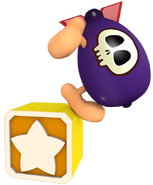