Kirby Wiki
Register
Don't have an account?
Sign In
Advertisement
in: Copy Ability, Copy Abilities in Kirby: Right Back at Ya!, Weaponry Copy Ability,
and 17 more
English

Old: Blue, floppy cap with a white trimming and pompom on the end, identical to Poppy Bros. Jr.'s hat. Bombs are solid black.
New: Navy blue party hat akin to a party popper with yellow, green, and pink explosion motifs on it, a red ribbon on the top, a large white trimming and a blue, diamond-shaped gem with a large yellow rim on the front. Bombs are dark gray-blue with several lighter gray-blue stars on them that explode into fireworks.

Bomb is a Copy Ability in the Kirby series, debuting in Kirby Super Star.

Bomb focuses on using explosives to attack at a distance or with strategic placement. Kirby can change the trajectory of his throws by holding down the attack button to make it thrown higher. In addition to being obtained from the Poppy Bros. Jr. enemy, who is also its Helper, Bomb can be obtained from Jungle Bomb, the Poppy Bros. Sr. mid-boss (which had given the Crash Copy Ability prior to this game), and the Combo Cannon's bombs.

In Kirby Super Star Ultra, Bomb can also be obtained from Combo Cannon's cannonballs (which had given the Yo-Yo Copy Ability prior to this game), Perot (who replaces Poppy Bros. Jr. in Revenge of the King), Masked Dedede's missiles, and Wham Bam Jewel's tiki bombs.

Bomb comes with a blue bobble hat and black bombs.

Bomb is limited to standard bomb throwing. However, when combined with other Copy Abilities to create Power Combos, it can be used to create various explosive options. Bomb is capable of destroying black color-coded blocks. Bomb can be obtained from Poppy Bros. Jr., Skud, Blowfish, Pedo, Rockn, and Miracle Matter's Bomb form.

Bomb can only use one bomb in this iteration, but it creates a massive explosion, similarly to Crash. Charging for longer causes the bomb to travel farther. Bomb is obtained from Balloon Bomber.

Bomb has multiple moves, as it did in its debut; Bombs can now be aimed by holding up or down before throwing, but it can no longer use Bomb Drop. It also makes use of the Fire element, allowing it to light Cannon fuses. Bomb can be obtained from Foley, as well as from bombs thrown/dropped by Bombar, Boxy, Moley, and Wiz.

In Kirby: Squeak Squad, Bomb can also light candles, incinerate grass and bushes, as well as vaporize clouds, snow, and ice. Upon obtaining the Bomb Ability Scroll, located in the Big Treasure Chest in Stage 3 of Secret Sea, Kirby can now mix a Bomb Ability bubble with either Ice or Spark Ability bubbles to get versions of bomb that are imbued with the Ice or Thunder elements respectively. Bomb can be obtained from Foley, as well as bombs thrown/dropped by Doc, Mrs. Moley, Daroach, and Dark Daroach.

Bomb returns with its techniques from Kirby Super Star and Kirby Super Star Ultra, except Straight Throw has now been replaced with Bomb Bowl, and Bomb Throw's aiming system is much more precise. Its appearance has been changed to give it a dark blue party hat with yellow and green star decorations, a red ribbon, and a blue diamond in the front; the bombs are also decorated with stars, and their explosions are more reminiscent of fireworks. Bomb can be obtained from Poppy Bros. Jr., Foley, Mr. Dooter's bombs, Bomb Machine's missiles, Metal General's missiles, and HR-D3's missiles.

Bomb is mostly unchanged from its appearance in Kirby's Return to Dream Land. Some of its moves were modified. Bomb can be obtained from Poppy Bros. Jr., Foley, Masked Dedede's and Shadow Dedede's missiles, and Queen Sectonia's and Soul of Sectonia's Floral Bombs.

In Kirby Fighters Deluxe, Bomb's Rare Outfit changes its hat to be decorated with orange and purple diamonds, a rainbow-colored pom-pom, and a pink heart in the front; the bombs are now purple and decorated with pink hearts.

In Kirby Fighters and Kirby Fighters Deluxe, any invincibility granted by a move is removed, except when taking damage or fighting bosses, i.e. Kracko, Team DDD.

Bomb appears as an unlockable Copy Ability. It can be unlocked in The Cake Royale after obtaining 20 League Points in the Beginner's League. It has Headgear based on Foley, a bomb, a party popper, as well as Qbby, which can only be obtained by scanning a Qbby amiibo.

Similarly to Kirby: Squeak Squad, Bomb can be enhanced by the elements from other Copy Abilities; unlike Kirby: Squeak Squad, it doesn't have the Sizzle element by default, and so can be enhanced to receive such. Bombs can also be picked up if they haven't detonated, allowing other characters to use them. In addition to being obtained from Poppy Bros. Jr., who is its Friend Helper, Bomb can also be obtained from Vividria's parachute bombs and Void Termina's/Void Soul's/Void's attacks that create black stars.

Bomb is available by default, at Fighters Rank 1. It has two Rare Hats: the Heart Bomb Hat from Kirby Fighters Deluxe, and a brand new Pirate's Tricorn. 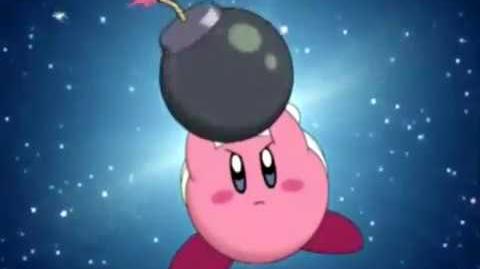 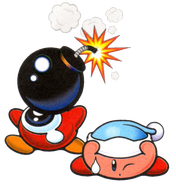 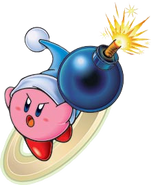 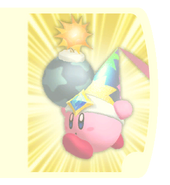 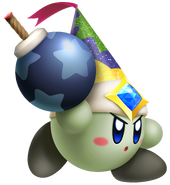 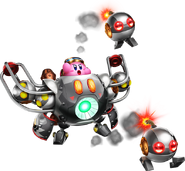 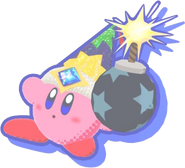 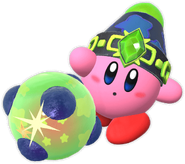 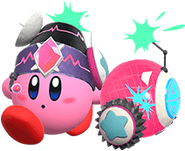 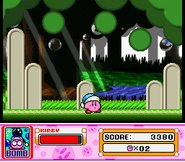 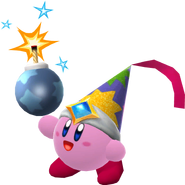