Boarding the Halberd is the sixth level in Dedede's Drum Dash Deluxe. It succeeds City and precedes C-R-O-W-N-E-D. It is part of an amusement park built by Magolor.[1]

King Dedede bounces across drums while collecting Musical Coins. The background is a dark hue, indicating that the stage takes place at dusk. Black trees, a carousel, spinning wheels, and various other structures decorate it. The moon and clouds appear as cardboard cutouts suspended in the air by strings.

The secret version of this level has more animated background details. Included among them are a carousel, spinning wheels, flying rockets, and roller coasters. Wavy lines hover in the air as well.

The music that plays here is a rearrangement of "Boarding the Halberd" from Kirby Super Star. The player is given two minutes to clear this stage.

The tempo is fast. This level introduces propeller drums--these drums automatically fly to the right when Dedede touches them and stop when they reach the end if their track. The king must time his movements precisely to stay on the moving drums. The stage is littered with pits and spiked rings, as well as one bumper. A few enemies also inhabit the stage: Beetleys swoop in and out of the foreground while swiping their horns, a Bouncy bounces up and down, and a Bronto Burt hovers in the air. Several Recovery Rings appear to heal the king. The level ends when Dedede reaches the Goal Drum and launches skyward.

By clearing the first six levels, the player unlocks secret levels. Boarding the Halberd is unlocked by completing the secret Floral Fields.

The tempo in this level is the same as its normal counterpart. There are more pits in the path and significantly more propeller drums, some of which are small; these make the level more hazardous. Most of the drums are also smaller, so Dedede must be more precise with his jumps. The most notable new obstacle included here are passing clouds--these obscure coins from the player's view. The many spiked rings scattered throughout the path can hurt the king as well.

Significantly more enemies inhabit the secret version of the stage: Beetleys swoop in and out of the foreground while swiping their horns, Bouncys bounces up and down, and Gordos hover in the air (typically in or nearby rings). A backbeat cymbal also appears to create coins. The level ends when Dedede reaches the Goal Drum and launches skyward.

Keychains are hidden in the background of every level in the game. The keychains in Boarding the Halberd and its secret counterpart are Kirby from Kirby's Adventure and Taranza. The former appears in each level, and the latter represents Taranza, as he is an important character in the then-newest game, Kirby: Triple Deluxe. 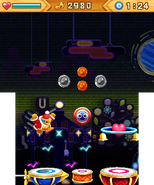 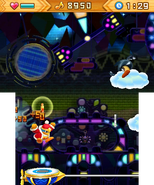 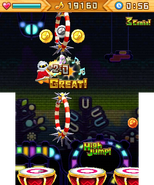 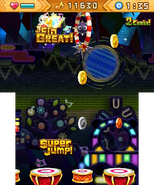