Blowfish is an enemy in the Kirby series, only appearing in Kirby 64: The Crystal Shards. It gives the Bomb ability when inhaled.

Blowfish resembles a spherical green fish with round black eyes, a white underbelly, two yellow pectoral fins and a yellow tail fin. He also appears to have a yellow beak-like mouth on the front of his face. When he is puffed up, his eyes widen and numerous red bumps protrude from his skin.

Blowfish is often found underwater, and when Kirby comes near him, he will puff up and his eyes will widen; small red balls will come out of his underbelly, and he will explode. A giant Blowfish appears in Stage 3-4 as a mid-boss, with four Glunks to use as ammo against Kirby.

Blowfish is a common nickname given to fish in the Tetraodontidae family.

Its Japanese name, ギョドン (Gyodon), uses the onyomi pronunciation for the Japanese word for fish, 魚 (Gyo); and どん (don), which can mean "bang" or "boom," referencing how it explodes after inflating. 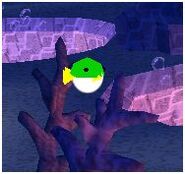