Blopper is an enemy in the Kirby series, debuting in Kirby's Dream Land.

Blopper is a squishy, blue blob resembling a jelly bean with red blush and a face. It disguises itself as a strawberry-topped cupcake.

Blopper replaces Cappy in the Extra Game. While disguised as a cupcake, it hops about Green Greens in a manner similar to Cappy. As it does this, it will shoot globs of frosting into the air that deal two bars of damage and make it difficult to approach. Long range attacks such as Star Spit and Air Bullet work best against it.

Once its frosting is removed with an inhale, it is slightly faster than the original Cappy, but loses its hard-to-avoid attacks. Still, touching the creature itself will result in two vitality lost.

Stationary Bloppers that do not shoot frosting and Bloppers without frosting exist as well. There are also a few Bloppers that wear frosting yet can be inhaled without revealing their true forms. 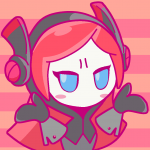