Blocky is a mini-boss that appears in Kirby's Dream Land 2 and Kirby's Dream Land 3. He also appears as an obstacle in Kirby Mass Attack's pinball minigame. He is a big cube rock monster similar to Rocky and gives Kirby the Stone ability.

This may also be a reference to the Adventures of Lolo series. Blocky resembles Rocky, who chases Lolo around the stage in an attempt to trap him. In Adventures of Lolo 3, there is even a giant Rocky who can actually hurt Lolo, which may be where the idea of Blocky came from.

In the early Kirby episode, "A Blockbuster Battle" (which came after the first episode of the series, "Kirby Comes to Cappy Town") King Dedede receives Blocky, the second demon beast to appear in the series, and sics him on Kirby while Tiff and Tuff are trying to find their friend a place to live. At first, Kirby is unable to suck up the monster, but the tables eventually turn when Meta Knight advises them that they can use Blocky's own weight against him. Becoming Stone Kirby, Kirby overpowers Blocky first, then leads him to a cliff as a plan to prove Blocky's own weight to be his downfall. The plan works, and while Kirby makes it back to the surface of the ocean, Blocky ends up sinking to the bottom of the sea, much to Dedede's dismay.

Blocky was one of the few monsters to not actually be destroyed by Kirby. He was last seen plunging to the bottom of the sea when Kirby defeated him. Blocky is dressed like a sumo wrestler and can flatten anyone he jumps on, and acts like a sumo wrestler, too. He can also split into four smaller versions of himself, which are his actual form in the games, except with meaner-looking faces.

Blocky also appeared in Kirby of the Stars Pilot as one of the many monsters Kirby faced. He was defeated by Spark Kirby. 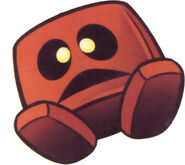 Kirby's Dream Land 2
Add a photo to this gallery