Blocky is a mid-boss in the Kirby series, debuting in Kirby's Dream Land 2. He yields the Stone ability when inhaled.

Blocky is a reference to the Adventures of Lolo series. He resembles Rocky, who chases Lolo around the stage in an attempt to trap him. In Adventures of Lolo 3, there is even a giant Rocky who can actually hurt Lolo, which may be where the idea of Blocky came from. Kirby Brawlball highlights this reference by putting Blocky and Lololo & Lalala together.

Blocky is a stone monster in the shape of a cuboid, featuring small, rectangular cuboid feet. He has two round holes in his head as eyes, with white circles where his pupils would be. In the earlier games, his mouth is usually straight, curving up slightly at the ends to make a smile. His Kirby's Dream Land 2 artwork depicts him as brown, however, most other sources depict him as gray.

In Kirby: Right Back at Ya!, Blocky initially appears as simply a small stone cube, but can grow quickly in a moment's notice, growing arms with gloved hands, legs with rectangular feet, and gaining a purple sumo outfit. Blocky's eyes are now with with black irises and white pupils, and is always depicted as angry. When Kirby manages to successfully inhale him, he splits into four smaller Blockys, which more greatly resemble his appearance in Kirby's Dream Land 3, although they are also depicted as angry and have white eyes with black irises and white pupils.

In Kirby: Triple Deluxe onward, Blocky's design has been updated; he is now a darker gray, and features smaller rocks around his edges and feet that are colored purple, green, and dark blue. His eyes are ovular and feature purple dots where his pupils would be; he is often depicted as angry instead of smiling. His DX form is colored beige, with the smaller stones being yellow, green, and magenta, and eyes being blue instead of purple.

Blocky makes his debut in Kirby's Dream Land 2 as a mid-boss granting Stone ability. His main tactics involve jumping and slamming on the ground in an attempt to crush Kirby, or charging at him. Both attacks result in him producing rocks that can be inhaled and spat back at him.

Blocky appears in this game as a regular enemy. He can be defeated from two hits and grants 1200 points per hit. When defeated, he drops the Flip item.

Blocky appears in Kirby Brawlball sub-game as an obstacle in the Lololo & Lalala stage. He cannot be destroyed, as Kirby just harmlessly bounces off of him. Blocky occasionally ground pounds, knocking Kirby away further than usual, which results in the risk of Kirby falling off-stage.

Blocky returns in Kirby: Triple Deluxe as a mid-boss, now sporting a new appearance. He retains his old attacks, but now he is able to use the new ones. He can use Dice Rush which involves him rolling in a similar manner to dice block, flattening Kirby should he be on his way. He can also float on the background and enlarge his head, and then follow Kirby before slamming him. He is also able to block now by transforming into stone statue, which makes him invulnerable to attacks.

A harder variant of Blocky named Blocky DX makes his appearance in this game. He has the same attacks, but now transforms into stone after charge, preventing him from slamming into a wall. He can also spin in the air and ram into Kirby, colliding with the wall as a result. He also gets a new variant of Dice Rush, where he climbs up the wall and then onto the ceiling before dropping on Kirby from above. He also tries to slam Kirby from the background twice (thrice on low health).

Blocky also appears in this game as a keychain, using his sprite from Kirby's Dream Land 3.

Blocky reprises his role as mid-boss in Kirby: Planet Robobot, now sporting new cybernetic appearance. He behaves the same way he does in Kirby: Triple Deluxe. A harder version of Blocky named Blocky 2.0 also makes his appearance in this game, behaving similarly to Blocky DX.

Blocky is first fought in the Ruins after being unlocked for 8 Gem Apples. He is the normal boss category and must be defeated before the player can access Whispy Woods. He uses his traditional attacks from Kirby: Triple Deluxe.

Blocky is first fought in the Dunes after being unlocked for 10 Gem Apples. He is the normal boss category and must be defeated before the player can access Parallel Nightmare. He behaves just like in previous modern Kirby titles.

King Dedede receives Blocky, the second monster to appear in the series, and sics him on Kirby while Tiff and Tuff are trying to find their friend a place to live. At first, Kirby is unable to suck up the monster (a reference to how in the games, Kirby can not inhale mid-bosses until they are defeated), but the tables eventually turn when Meta Knight advises them that they can use Blocky's own weight against him. Becoming Stone Kirby, Kirby overpowers Blocky first, then leads him to a cliff as a plan, causing Blocky's own weight to be his downfall. Blocky stomps so hard that he and Kirby both end up crashing into the ocean and, while Kirby makes it back to the surface, Blocky ends up sinking to the bottom of the sea, much to Dedede's dismay and sadness.

Blocky was one of the few monsters to not actually be destroyed by Kirby, and technically not get defeated by Kirby himself, but rather the sea. After plunging into the sea, he is not seen again for the rest of the series, implying that he drowned or eroded away.

Blocky's first form is that of a small rectangle concrete block that's colored in light gray.

Blocky doesn't have much in a way of abilities in his first form, the only thing that he can do is transform into his second form at will.

In his second form, Blocky's main ability is being able to jump at incredible heights and slam down on the target. He can flatten anyone he jumps on and can create massive shock waves by slamming his foot into the ground. He is incredibly heavy, being able to crash though all the floors in Dedede's castle. He can also split into four smaller versions of himself, which more greatly resemble his form in the games, except with meaner-looking faces; they are all formidable fighters, can reform if destroyed, and can recombine to form Blocky at will. He can also transform back into his smaller form at will.

Blocky also appeared in Kirby of the Stars Pilot as one of the many monsters Kirby faced. He was defeated by Spark Kirby along with Efreeti. 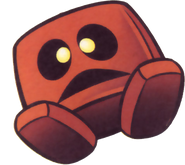 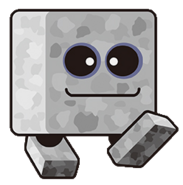 Kirby of the Stars Marumiya Commercial

The smaller version of Blocky in the anime 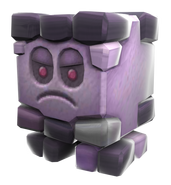 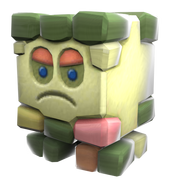