Blockin is an enemy that appears in Kirby & The Amazing Mirror and Kirby: Squeak Squad. It disguises itself as a Star Block and chases Kirby if he attempts to inhale or attack it. Blockin are often found in ruins and other artificial structures and are common in Moonlight Mansion and Carrot Castle in Kirby & The Amazing Mirror. Blockin's behavior is similar to Scarfy's. It cannot be inhaled.

Blockin looks like a yellow, floating block with an angry face. It is usually found near groups of Star Blocks, and is somewhat darker than normal blocks. It does not yield a Copy Ability, as it cannot be inhaled. Slide attacking a Blockin will defeat it without it revealing its true form.

Blockin disguises itself as a Star Block. If Kirby tries to inhale or attack it, Blockin will reveal itself, flashing at first, and charge at him. It will explode if Kirby avoids it.

Blockins are noticeably slower in Kirby: Squeak Squad than in Kirby & The Amazing Mirror. 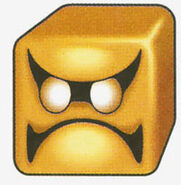