Kirby Wiki
Register
Don't have an account?
Sign In
Advertisement
in: Articles with non-canonical information, Characters, Allies,
and 2 more

A Blob is a character in the Kirby series, debuting in Kirby's Avalanche.

Blobs are small squishy, jelly-like creatures with two large shiny eyes. They come in five colors: red, yellow, green, blue, and purple. The Blobs will also vary in shape depending on what color they are.

Pairs of colored Blobs drop from the top of the screen. The player must rotate and move the groups before they reach the bottom of the screen or land on the pile, so that matching-colored Blobs touch. When four or more same-colored Blobs connect, they explode, causing any Blobs above them to fall down and fill in the space. If the player manages to set off a chain reaction, an avalanche occurs; Blob-like Boulders fall on the opponent's screen. The number of Boulders that falls depends on both the number of Blobs popped and the number of consecutive chain reactions—up to 36 can be dropped at once. These Boulders can only be destroyed if a player manages to explode a group of Blobs that are in direct contact with the Boulders.

If the third column from the left piles up to the top of the screen, the player who allowed the pileup loses. 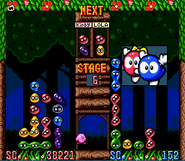 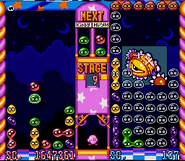 Blobs appear on the Game Over screen.