Blizzard (previously called Ice) is an element in the Kirby series.

Blizzard is the ice-based element. Copy Abilities such as Ice and Freeze excel at using this element, but it can also be found in other abilities and Dream Friends. Blizzard is used for extinguishing Fire Blocks, freezing water and lava, freezing enemies in blocks of ice, and is very effective against fire- and water-based enemies.

Kirby Star Allies brings a greater focus on using abilities in tangent with one another in order to create Friend Abilities. The Blizzard element is found in Ice, Kine's Ice Kine, Adeleine's Ado's Painter as Ice Dragon, and Daroach's Ice Shot, Ice Laser, and Ultra Ice Laser. Blizzard can freeze enemies and extinguish fires. Blizzard can be used in conjunction with the following Copy Abilities and Dream Friends to perform these Friend Abilities:

Icicle Lance initiates Water's Geyser, and causes icicles to fly out, which can cut ropes and chains. Ice Curling initiates a unique version of Stone Change, Stone Rick, or Stone Gooey, turning them into curling stones that roll along the ground, causing a trail of ice to appear in their wake. The other Friend Abilities serve the same purpose as the Sword and Bomb Ability Scrolls, but have additional modifications to make them more unique, such as producing icicles and ice chunks. Like other elements, it increases the strength of all attacks by 25%. 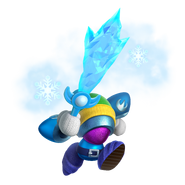