Blipper is a fish-like enemy that wears goggles and appears in most of the Kirby series. They are the most common aquatic enemy in the series. Blipper does not give a Copy Ability when inhaled.

Blippers have orange (sometimes yellow) underbellies and have a red hue on their upper section. They have two light blue fins on either side of them and have one back fin with the same coloration. Every Blipper sports a large, blue-rimmed pair of goggles with a black strap holding them up. In most games, it is usually hard to notice its eyes through its goggles, but when they are visible they are seen to be beady and black. Blippers also have small mouths that they constantly keep open.

Blippers appear since the first Kirby game. Blippers are similar to Waddle Dees on land—very common, very weak enemies, but they are found underwater instead. Some just swim around back and forth, some try to chase Kirby, and others will jump out of the water in an attempt to hit him. Being fish, Blippers just flop around helplessly if they end up on land, but can still damage Kirby.

Blipper reappears in Kirby's Adventure and its remake with the same behavior and it gives no Copy Ability when inhaled by Kirby.

Blipper reappears as an enemy in Kirby Super Star and its remake, acting the same as before.

Blippers appear as enemies in Kirby's Epic Yarn and its remake, Kirby's Extra Epic Yarn. In these games, whenever they see Kirby or Prince Fluff, they will dash towards them and try to hit them, but even if they do, they will just turn upside down and float on the surface without doing any damage.

In Kirby Mass Attack, a variant of Blipper, Biripper, exists. These are capable of producing electric shocks.

Blipper appears in Kirby's Return to Dream Land and in the New Challenge Stages in Kirby's Dream Collection Special Edition as well. It appears in the Normal Challenge. These are the first games where its possible to see through Blipper's goggles. Kirby GCN was slated to show this as well, but it never saw release.

Blippers reappear in these games with the same behavior of Kirby's Return to Dream Land.

Red and green Blippers appear in Kirby and the Rainbow Curse. Green Blippers slowly chase Kirby when they spot him. They can be found in stages and are also summoned by Deepsee.

Blipper reappears in Kirby Star Allies and maintains the same behavior as the previous titles.

Blipper appears and functions identically to its previous incarnations. In Waddle Dee Town, if Kirby has successfully rescued 145 Waddle Dees, he will unlock the fishing pond minigame, where he can catch Blippers in exchange for Star Coins. Should Kirby catch the rare, golden Bling Blipper, he will be awarded with a special figurine and a picture of the catch in his house.

Blipper appears in Super Smash Bros. Brawl as one of the stickers players can earn. The Blipper sticker raises characters' swim time by 20 allowing them to swim for longer periods without drowning. It uses Blipper's design from Kirby: Squeak Squad.

Blipper's name may be a corruption of the word flipper, referring to its fins and the equipment worn for swimming or diving. It may also incorporate the word blip, a spot on a radar screen, or a short, repetitive sound such as dripping water. 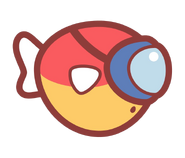 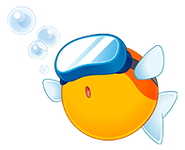 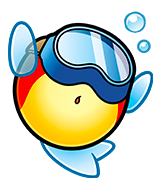 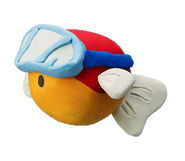 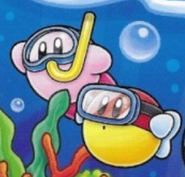 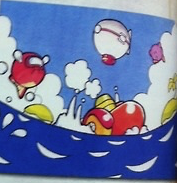 Concept artwork with a blipper as seen in the Kirby's Dream collection manual. 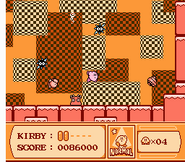 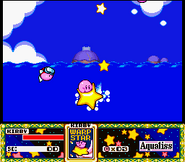 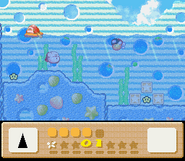 Kirby and the Rainbow Curse (green)