Blado is an enemy in the Kirby series, debuting in Kirby: Canvas Curse. It is completely invincible.

Blado is a variant of Gordo. As such, it is a black ball with eyes. It wears a permanent scowl and has four ax blades instead of spikes. Blado is usually attached to a chain.

Blado makes its first appearance in the stage Machine Mansion. Blado often moves in a circular motion, injuring Kirby if he touches it. In some cases, Blado will swing from side to side like a pendulum.

Blado retains its role from the previous game, moving in a circular motion in an attempt to hit Kirby and his Bandana Waddle Dee companions. 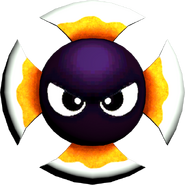