Serves as a gateway between realms, corrupts those who gaze upon its reflection.

The black mirror is an item in the Kirby series, debuting in Team Kirby Clash Deluxe. It is the origin of Dark Taranza and King D-Mind, and seems to be the reverse counterpart of the Dimension Mirror.

The black mirror resembles a darker, more sinister version of the original Dimension Mirror. Instead of an angelic design with feathery wings, it is adorned with numerous spikes and, with two of the spikes curving upward to resemble demonic horns. The mirror itself appears onyx with some hints of silver, contrasting the Dimension Mirror's golden color scheme.

The origins of the black mirror are unknown. Taranza had somehow obtained the black mirror in an attempt to use its powers to resurrect Queen Sectonia after her death. However, he could not control its dark powers, and as a result, it corrupted him and made him lose his sanity.[1] In this state, he began influencing legions of powerful enemies to besiege the Dream Kingdom.

With the mirror shattered, Taranza comes to his senses and becomes a passive member of the village. Peace returns to the Dream Kingdom and Team Kirby vows to suppress any threats that should emerge.

King D-Mind is forced back into the black mirror. 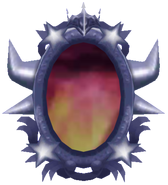