Biospark (also spelled BioSpark or Bio-Spark) is a fairly rare enemy character from some Kirby games, appearing only in Kirby Super Star, its remake, and Kirby: Squeak Squad. He's a short little ninja whose colors are black, purple, red, and blue. Being a ninja, Biospark has a multitude of common and stereotypical ninja-styled attacks. He possesses Kunai, lightning speed, has the ability to cling to walls, and even blend into the background with a seemingly magical cloth. He along with Tsukikage is the only supplier of the Ninja ability in the games, with the exclusion of Spinni's shuriken. He bears a fairly strong resemblance to Meta Knight.

Biospark is a rare enemy that appears rather infrequently. Upon seeing Kirby he jumps around and attacks. His attacks, as weak as they may be, can be dealt across long distances. He launches many Kunai at Kirby. If Kirby is close to Biospark he will grab him, leap into the air and slam him to the ground in a similar fashion to the Backdrop ability. He has one very dangerous attack in which he starts slashing his Kunai rapidly like Ninja's dash attack and it will take half of Kirby's HP. He is also the Helper for the Ninja ability and wears purple instead of black. In Helper to Hero, he wears red with blue hair and blue feet.

Biospark returns along with the Ninja ability. Biospark also has a new arsenal, too. He can now hide behind a sheet to blend in with surroundings (camouflage). However, Biospark's hands are visible at the top of the sheet while holding it up. If Kirby draws near while he is in hiding, Biospark throws the cloth aside and then slashes Kirby with one of his kunai knives.

Biospark appears in Kirby Mass Attack as well. in Kirby Brawlball, he appears as an obstacle in the basic King Dedede stage. When he first appears, he is clinging to one wall, and when Kirby hits him, he disappears. He then respawns just standing there, and will slash at Kirby with a kunai when he comes close. 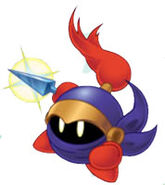 Kirby Super Star
Add a photo to this gallery
Retrieved from "https://kirby.fandom.com/wiki/Bio_Spark?oldid=123409"
Community content is available under CC-BY-SA unless otherwise noted.