Bio Spark (spelled Biospark in Kirby Super Star) is an enemy in the Kirby series. He gives the Ninja ability when inhaled.

Bio Spark is a small, round ninja wrapped in a cloak. This cloak is tied at his back, and is partially covered by a golden piece of ornamental headgear. He has small red hands, and red feet that resemble those of Kirby. He sports a long red tassel that emerges from a golden ring atop his head. Bio Spark's face is concealed by his cloak, with only his white, oval eyes visible.

Bio Spark appears as an enemy in these games, as well as the Helper for the Ninja ability. Bio Spark hops back and forth, pausing at regular intervals to attack. He may throw three daggers in quick succession, or commence a rapid slashing attack while moving forward. If he gets close to Kirby, he may grab Kirby, leap offscreen, and slam Kirby into the ground with the Air Drop attack. As a Helper, Bio Spark has access to all the moves used by Ninja Kirby. He can also perform Shock underwater.

Bio Spark appears as an enemy in this game. He behaves almost exactly as he does in Kirby Super Star, with the addition of one new technique: he can now hide himself behind a cloak of invisibility. This cloak takes on the appearance of the background, and renders Bio Spark invulnerable to attacks. His hands are visible at the top of the cloak. When Kirby draws near, He will throw off the cloak and resume his normal attacking behavior.

Bio Spark makes a cameo in the Kirby Brawlball sub-game. He normally clings to a wall, but will drop onto the board when hit by Kirby. Hitting him also triggers the appearance of Tac on the board. Once on the board, Bio Spark functions as a third flipper, and slashes with a dagger whenever the player presses the L or R button. With each attack, he also throws a single dagger. If this dagger hits Kirby, points will be awarded. He resumes clinging to the wall after Kirby has been grabbed by Tac.

Bio Spark returns as an enemy in Kirby Star Allies. He reprises his role as a friend for the Ninja ability. He can also be controlled by a CPU or another player. 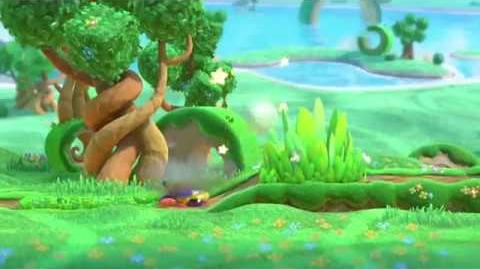 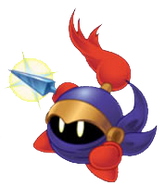 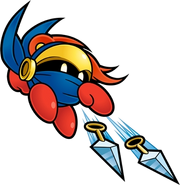 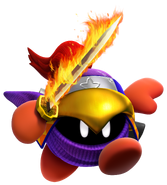 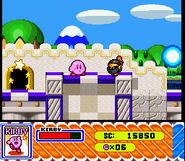 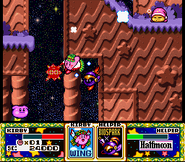