Regular enemy, Large enemy
Big Waddle Dee is a large enemy in the Kirby series, debuting in Kirby & The Amazing Mirror. It is one of the many variants of the Waddle Dees. It yields no Copy Ability when Super Inhaled.

Big Waddle Dee, as its name indicates, is an over-sized Waddle Dee. It has no defining traits, attacks, or characteristics to set it apart from regular sized Waddle Dees other than its massive size.

Being only a large Waddle Dee, it meanders about aimlessly, but can hurt Kirby if the two collide. Despite their larger size, Big Waddle Dee does not have significantly more health than a regular Waddle Dee does, making it about as simple to defeat. Big Waddle Dee is incapable of jumping but can fall from ledges.

Big Waddle Dees are orange, three times bigger, and are also immune to Kirby's yarn whip (but not his Weight form). A harmless sleeping one appears in Castle Dedede and there is no way to wake it up, hinting at their laziness. Yin-Yarn drops two from the sky as an attack.

Big Waddle Dee appears exclusively in Dedede Resort, most notably in Stages 6 and 10. It carries a giant bomb and lobs it at the Kirbys when it sees them. Its size makes it stronger than many smaller enemies, requiring a mob of Kirbys or several small attacks to be defeated. A Big Waddle Dee wearing a colossal Star Block as armor serves as a mid-boss in Stage 7.

Big Waddle Dee appears exclusively in Guest Star ???? Star Allies Go! and Heroes in Another Dimension modes. It is only slightly larger than a regular Waddle Dee. 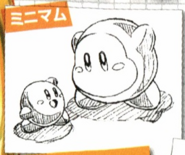