Big Gordo is a large enemy in the Kirby series, debuting in Kirby Mass Attack. It is a larger variant of Gordo. Like regular Gordos, they can't be defeated or damaged in any way.

In Stage 5 of Sandy Canyon, Big Gordos float through the air and appear as obstacles. The Kirbys have to avoid letting the balloon ride touch them as they will pop one balloon from the total number of balloons used to keep the ride floating. If all the balloons are popped, the Bobbleship falls from the sky, KO'ing all Kirbys, and resulting in an automatic game over.

Big Gordo appears in Stage 5 of Gigabyte Grounds and Stage 3 of Access Ark. In both cases, he takes the form of a Big Gordo from Sandy Canyon in Kirby Mass Attack, albeit with a black body and smaller spikes. He is used as ammunition for a Chained Gordo Shooter that Kirby controls, and as such does not pose a threat to the hero. The Gordo Shooter pulls back further the more Kirby's Robobot Armor wrenches it, changing the trajectory of the Gordo. When the catapult's chain is cut by Sword or Cutter Mode, the Big Gordo is launched, crashing through whatever cracked wall or floor it hits.

Big Gordo appears as one of the three enemies in the entire game. He is released by Whispy Woods' branches as an attack in the Tougher: Whispy Woods quest. This attack, as well as the physical appearance of Big Gordo, is reused from the Flowery Woods DX fight in Kirby: Triple Deluxe. 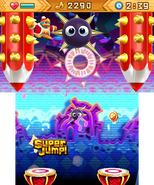 Kirby Mass Attack (Volcano Valley)
Add a photo to this gallery
Retrieved from "https://kirby.fandom.com/wiki/Big_Gordo?oldid=323076"
Community content is available under CC-BY-SA unless otherwise noted.