Belly Buster is a monster created by Nightmare Enterprises, appearing in the Kirby: Right Back at Ya! episode A Half-Baked Battle.

Belly Buster's first form is a strange pie-like creature. He has a custard filling acting as the majority of his body, a large red core (which is actually formed out of jelly), and five orange hands sticking out of his body. Each hand holds a frying pan which he uses to fire pies. Belly Buster's center is between two orange waffle-like structures. When Belly Buster is enraged, his custard turns pink and releases steam.

Belly Buster's second form is that of a giant, maize-colored stomach. He has sunken-in red eyes and tan spots on his left side.

After Dedede gets angry at the Cappies and starts a large-scale pie war with them, he orders this monster to bury the town in pie. Belly Buster first appears as a large pie-like creature that hovers through the air. He doesn't take insults very well, and throws nasty-tasting pies at his enemies when angered. His first form forces almost everyone in Cappy Town to eat his vile pies and also covers the entire town in custard. Unfortunately, when everyone begins to complain about the pies, Belly Buster takes it personally, and goes on a rampage flinging pies even more rapidly. Belly Buster accidentally crashes into Dedede's limousine when he chases Kirby, which pushes him over the edge. In a fit of intense rage, Belly Buster reveals his true form—a giant stomach-like being. Belly Buster then swallows the limo, trapping Kirby, Dedede, and Escargoon inside him. Dedede then comes up with a dangerous (and poorly planned) scheme to blast Belly Buster with a bomb and save themselves from being digested, not realizing that they would be blown up too. Escargoon, worrying more about being blown up than being digested, commands Kirby to inhale the bomb. Kirby does so and becomes Bomb Kirby. Kirby then strategically launches several bombs so that they will not hurt the trio. These bombs then explode, destroying Belly Buster from the inside and freeing the trapped characters.

Belly Buster throws foul-tasting pies at his enemies as a form of attack. Also, when angered enough, he asumes his true, stomach-like form. 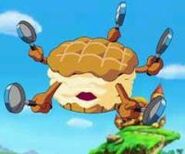 Belly Buster after he has taken too many insults, before transforming into his stomach form.
Add a photo to this gallery
Retrieved from "https://kirby.fandom.com/wiki/Belly_Buster?oldid=345550"
Community content is available under CC-BY-SA unless otherwise noted.