Beetley is an enemy in the Kirby series, debuting in Kirby: Triple Deluxe. He yields the Beetle ability when inhaled.

Beetley is a small, round, yellow insect. He has a navy blue exoskeleton (which appears grayish in-game) with a frontal horn and an anterior projection (similar to a rhinoceros beetle's pliers). He can open his rear wing covers to reveal transparent beetle wings. Beetley walks on orange feet very much like those of Kirby. The enemy has angry eyes with blue irises.

Beetley first appears in Stage 4 of Fine Fields and reappears in many stages thereafter. He marches back and forth across the ground. If Kirby approaches him from any direction, he will attempt to attack him with one of two moves: The enemy will either take a step back and thrust forward with his horn, or spin vertically into the air with a move that is very similar to Beetle Kirby's Spiral Horn attack.

In this game, Beetley will periodically fly between the foreground and the background. When he is in the foreground, the enemy will pause and unleash a flurry of rapid slashes with his horn in an attempt to hit King Dedede. Beetley will then resume his normal flight pattern.

Beetley returns in Kirby Star Allies. He provides the Beetle ability when inhaled, and can be controlled by the CPU or another player through the returning Helper system. He is also one of the helpers that are playable in Guest Star ???? Star Allies Go!; he is known in the mode as the Unbeatable Beetle.

Beetley's name is derived from beetle, the insect that the enemy is based on. 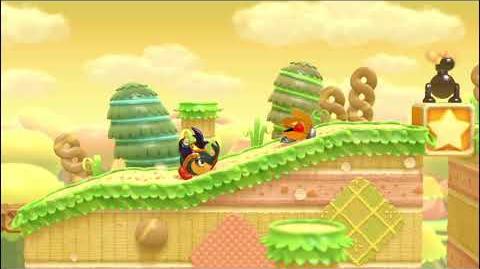 Beetley spirals into the air. 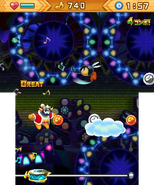