A jester's hat with two branches. One orange with polka dots (stars in the artwork) and one red. Kirby turns yellow in Kirby Super Star and its remake.

The most basic (and the most common) move used by the Beam ability is the Beam Whip, in which Kirby creates a small chain of light and electrifies any enemy in his path. Because of its relatively slow movement and its weak offensive power, it may not be the best ability for close-combat. However, what it lacks in power, it makes up for in its long ranged qualities.

Like most of Kirby's abilities, Beam cannot be used underwater. However, due to its electric properties, Beam can electrify the surface of water (Squeak Squad only) and some metallic platforms.

Beam Kirby appears in Super Smash Bros. Brawl as a common trophy depicting his Super Star design, but with his hat's colors reversed.

Beam may have been planned to appear in this game before it was cancelled, considering the fact that an electric beam-shooting Waddle Doo appeared in the trailer. 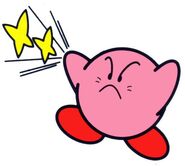 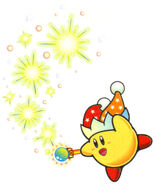 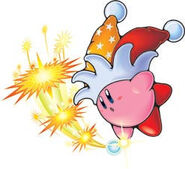 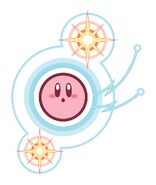 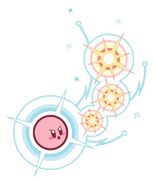 Kirby Squeak Squad
Add a photo to this gallery
Retrieved from "https://kirby.fandom.com/wiki/Beam?oldid=78797"
Community content is available under CC-BY-SA unless otherwise noted.