Last one standing in battle wins!Description

Battle Arena is one of the ten game modes in Kirby Battle Royale. It is a basic battle that can be won by knocking down all of the opponents. The [team with the] last player standing wins. It is unlocked by default.

Battle Arena is first played in the first Beginner's League Battle in Story Mode. It's played in every league, and is the last Battle Mode featured in each Qualifying Battle. Deluxe Coliseum is only played on Qualifier Battles and during the Boost Orb tutorial; otherwise, it is the Battle Coliseum. Battle Coliseum is exclusive to Story Mode, as it functions identically to the Deluxe Stadium, only having a different appearance.

Players fight each other in an arena while using a specific Copy Ability. Moves can be performed by using B and Y inputs, as opposed to most Kirby games, which only use one button for attacking. B is used to Attack, Intense attack, Charge attack, Aerial attack, and Throw, while Y is used for Special attacks. Kirbys can be temporarily knocked out from stronger attacks, although pressing a button while being sent flying can cancel this effect on some moves. When a Kirby is KO'd, he will be partially buried into the ground, face-first; KO'd Kirbys will return to battle after a period of time—which can be shortened by repeatedly pressing A—but with less HP.

Deluxe Coliseum feature's Dedede's motif in its design, with his peace symbol in the middle, a mostly golden floor with alternating red and yellow triangles along the circumference. It also features a golden statue of King Dedede himself outside of the fighting arena, and a special doorway that leads to the throne room.

Battle Coliseum functions identically to Deluxe Coliseum, simply having a more gloomy design, mostly decorated with gray, and torches being present outside the fighting arena. It is exclusive to the game's Story Mode, being played in any League Battle that include Battle Arena except for Qualifier Battles, which always take place in the Deluxe Coliseum.

The last one standing when all rivals are KO'd wins!Defeat rivals to win

To knock out rivals, attack them until their health hits zero.How to KO rivals

Press A repeatedly to wake up if KO'd. The more you faint, the longer it takes to recover.Recovering from a KO

Fight head-on using many abilities! The last one standing is the victor!Collection Lists

A fierce battle in a colosseum. Use your skills to knock out all your opponents at once.Description 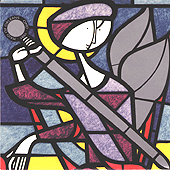