Kirby Wiki
Register
Don't have an account?
Sign In
Advertisement
in: Articles with non-canonical information, Copy Ability, Copy Abilities in Kirby: Right Back at Ya!,
and 2 more
English

A decorative head-cloth with a little star-tipped baton design on it.

Air Rider
Baton is one of Kirby's Copy Abilities. This one is unique to the anime, and has so far not appeared in any game.

Along with Water, Iron and Top, it appeared in Episode 97 of the anime, and were all created by fans. There was a contest in Japan to submit Copy Ability ideas, and this was one of the lucky winners.

Baton Kirby only appears in anime, Kirby: Right Back at Ya!. He wears a cloth on his head with a little star-tipped baton design on it. The baton he wields is red and yellow, with mini-figures of himself on the ends. With it he zaps the enemy with a yellow beam and controls them. If he twirls his baton, the enemy is spun around as well. If Kirby throws his baton, the baton and the enemy explode. 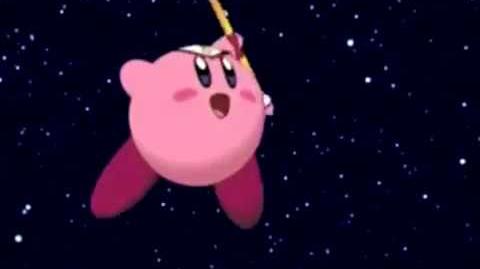 Kirby Right Back at Ya Hoshi no Kaabii - Baton Transformation

The sequence starts with a twirling baton. Kirby grabs it, twirls it, and strikes a pose.