Regular enemy
Batamon are mysterious enemy characters that appear in Kirby's Dream Land 3. They seemingly do not have any purpose. Batamon are notable for bearing a great, uncanny resemblance to Kirby and are very secret enemies.

Almost all Batamon are found patrolling behind the walls inaccessible to Kirby, and they are also very rare to encounter. However, many abilities and Animal Friend combinations can put an end to them. The only way to encounter a Batamon face to face without hacking the game is by entering a hidden door in Cloudy Park. If Kirby decides to inhale this Batamon, he doesn't get an ability.

The most interesting thing to note about Batamon are their aforementioned resemblance to Kirby. Batamon appears as a nearly identical creature to him, although they differ in width and facial appearance, as Batamon are wider and have a more spread-out face. Their near-identical appearance suggests that they could possibly be of the same species.

It has also been believed to be an abandoned sprite for Kirby in the early stages of the game's development, though this is purely speculation.

Batamon makes an appearance as one of the paintings Adeleine can make in Kirby Star Allies. It walks around damaging any enemies it runs into. 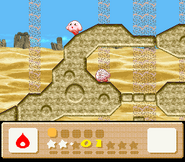