Bastron is a battleship of Claycia's design, debuting in Kirby and the Rainbow Curse.

Bastron is a colossal pink and purple ship. Its main body is shaped like a bell. Connecting to this is the ship's curved neck and head, which is adorned with two eyes and a beret. A large cannon extends from the head and sixteen smaller cannons protrude from the body. Curvy veins and impressions cover Bastron's exterior. When Bastron appears later in the game, it wears an eye patch over its right eye.

Claycia sends Bastron to follow and shoot at Kirby from the background of the stages The Wild Red Yonder and Burning Secrets. The ship's starboard cannons aim at the air (with a target marker indicating where their shots will land) before firing a volley of cannonballs. These cannonballs burst into flames upon impact, creating another hazard for Kirby. Toward the end of The Wild Red Yonder, Bastron's facial cannon begins aiming directly at the hero; after the target grows to full size, the battleship lets loose a barrage of six cannonballs, resulting in a large field of fire.

In both of these stages, Kirby merely flees from Bastron.

Bastron fires cannonballs at the air.

Kirby flees from Bastron in a gondola.
Add a photo to this gallery

In the stages Kirby Rocket's Big Blastoff and Back to the Battleship, Elline transforms Kirby into Kirby Rocket, prompting him to fly into Bastron's tailpipe and through the battleship's bleak interior. Its interior is primarily composed of corridors with metal plating, gears, and pipes. Bastron is constructed differently between the two stages: In Kirby Rocket's Big Blastoff, very few hazards are present. Bastron is filled with boost rings, Star Spinners, and wall panels that Kirby Rocket must fly past to unlock gates. In Back to the Battleship, Kirby Rocket not only encounters these same objects but also cannons, flame jets, and giant saws.

Kirby Rocket flies past a giant saw.
Add a photo to this gallery

In both stages, Kirby Rocket triggers a self-destruct sequence by hitting a large switch. Though Elline initially panics, she quickly brainstorms a plan to escape. The player is shown a blueprint of the room (which is arranged differently between stages) and can draw a pathway to use as a guide. Kirby Rocket must then hit either three or five wall panels to unlock a gate and escape before the time runs out. In Back to the Battleship, the ceiling attempts to crush the hero as he makes his exit. Bastron explodes at the end of both stages, dropping many Point Stars.

Kirby Rocket attempts to escape Bastron.
Add a photo to this gallery 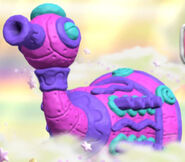 Bastron follows Kirby through the clouds.

Bastron floats off in the distance.

Kirby and the Rainbow Curse (Figurine)
Add a photo to this gallery
Retrieved from "https://kirby.fandom.com/wiki/Bastron?oldid=301019"
Community content is available under CC-BY-SA unless otherwise noted.