Bang-Bang is an enemy in the Kirby series, debuting in Kirby & The Amazing Mirror.

Bang-Bang resembles a gray missile. He has yellow feet (only in Kirby & The Amazing Mirror), a yellow coloration at the tip of his front and a red hue at his other end.

Bang-Bang makes his first appearance in this game. While he may seem docile at first, he will begin to build up power eventually and will shoot up into the sky after storing enough energy. Like the actual ability that he grants, Missile, when inhaled, Bang-Bang has little control over his movements after launch, so at times he will only have a chance to travel in one direction after becoming airborne. Unfortunately for Bang-Bang, he is instantly obliterated when he collides with an object, whether it be a wall or Kirby.

Droppy, a shape-shifting enemy, can turn into Bang-Bang as one of its transformations in this game.

In his most recent appearance, Bang-Bang appears in Kirby: Canvas Curse with the same design, but without feet. He also retains his ability from Kirby & The Amazing Mirror. However, in this game, he takes less time to charge up power and is almost always airborne and ready to take down Kirby. Bang-Bang is also a great deal faster and more accurate than his mirror world counterparts, making him much more dangerous. 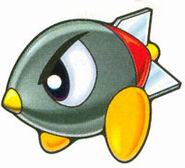 Kirby: Canvas Curse
Add a photo to this gallery
Retrieved from "https://kirby.fandom.com/wiki/Bang-Bang?oldid=306533"
Community content is available under CC-BY-SA unless otherwise noted.