Balloon is a Copy Ability that has only appeared in Kirby: Canvas Curse to date.

When Kirby uses the ability, he inflates himself. If the player taps the screen with the stylus, Kirby will fill up with air and become an inflated balloon. As a balloon, his body turns red and he can float leisurely through the air. But like all balloons, he is extremely fragile, and if tapped by the stylus enough times, he will pop and shrink back down in a tremendous explosion, which can also defeat nearby enemies.

In earlier games, namely Kirby's Dream Land and Spring Breeze, Kirby had similar properties (though he still has arms) when he imbibes the power of the Sparkling Stars. But in these earlier appearances, Kirby doesn't return back to normal size in an explosion, but instead by simply releasing the Sparkling Stars.

Aside from the Sparkling Stars and Copy Abilities, in most of the main games, Kirby himself also has the natural ability to inflate himself and fly about in the air, although he is able to control where he flies; and deflates by spitting out a puff of air.

This ability was likely added to resemble Kirby's innate ability to hover, which also serves as the reason the ability has never reappeared. Its form of attack is referenced in Circus' Balloon Pop Art, however. 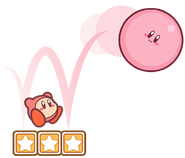 Kirby: Canvas Curse
Add a photo to this gallery
Retrieved from "https://kirby.fandom.com/wiki/Balloon?oldid=321742"
Community content is available under CC-BY-SA unless otherwise noted.