Ball is one of Kirby's Copy Abilities. It has so far only appeared in Kirby's Adventure and its remake Kirby: Nightmare in Dream Land.

When Ball is used, Kirby becomes a perfect sphere and is able to roll and bounce around the level when the jump button is held, damaging anything he hits in the air. The longer he falls, the more force his bounce will have when he hits the ground.

Ball is a fast-moving ability and can be difficult to control when faced with a wall or cliff. On top of that, although Kirby is invincible when flying through the air, he is vulnerable both at the peak of his jump and immediately after he hits the ground, meaning he will take damage if he happens to land directly in front of a moving enemy (or lands right on top of a boss or invincible enemy like Shotzo). However, while it may be impractical when dealing with minor ground-borne enemies, the Ball ability's saving grace is, strangely, its sheer damage: it can destroy most of the game's bosses with a mere four hits, and mini-bosses (the ones that don't grab Kirby) with as few as two or three.

Also, in Kirby: Nightmare in Dream Land, Ball Kirby (when not in ball form) has a sort of a hat like Yo-Yo or Wheel, but not exactly alike and without a visor. Strangely, there is another design for this cap in the icon. Along with Hi-Jump, it was upgraded - the top of the screen is considered a wall and will not reset Kirby's momentum. 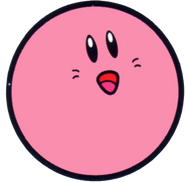 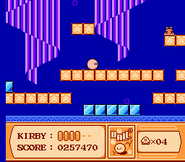 Kirby when not in ball form - Kirby: Nightmare in Dream Land
Add a photo to this gallery 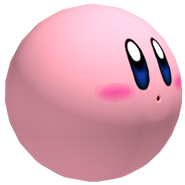 Retrieved from "https://kirby.fandom.com/wiki/Ball?oldid=331861"
Community content is available under CC-BY-SA unless otherwise noted.