Kirby Wiki
Register
Don't have an account?
Sign In
Advertisement
in: Articles with derivative titles, Characters, Allies,
and 2 more
English

Bakasa is a character in the game Kirby's Dream Land 3. He wants Kirby and Kine to use Kine's Parasol ability. In return, he will give Kirby a Heart Star at the end of the level. Bakasa can be found in a hidden room in the second area.

Bakasa has a yellow egg-shaped body and a light green frill around his waist. He has an umbrella on top of his head. 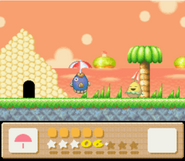