A dark red headband (remake only).

Backdrop focuses on grabbing opponents and slamming them with wrestling techniques to deal damage. It is one of the most complex abilities in the game, featuring six separate throws, whereas most Copy Abilities in the game only have one. Backdrop grabs opponents by inhaling them. As such, enemies that cannot be inhaled, such as Scarfys, cannot be grabbed. Backdrop is obtained from the Bugzzy mid-boss.

In Kirby: Nightmare in Dream Land, Backdrop now uses a dash grab, the same method used by its successor Suplex. As such, it can grab things that inhaling cannot.

As Suplex features the same mid-boss to obtain the ability, features all of Backdrop's techniques in addition to more, and Backdrop's visual similarity to Fighter, Suplex is viewed as the replacement for Backdrop or even the same ability, although this has not been formally stated; Backdrop was even considered for Kirby Battle Royale as a Copy Ability that could be added into the game. 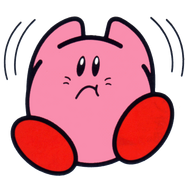 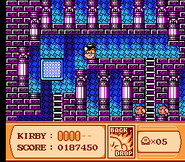